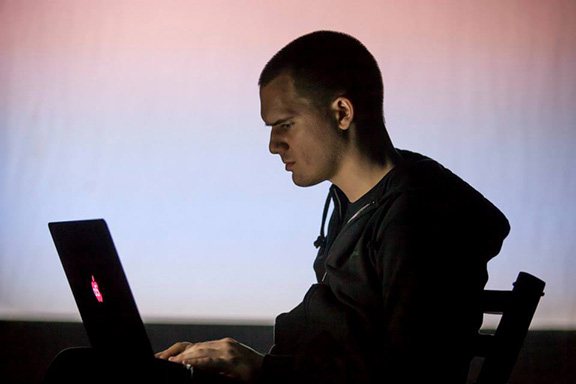 Don’t miss a chance to sit down with Kyle McDonald, an artist working with code. He is a contributor to open source arts-engineering toolkits like openFrameworks and builds systems that allow artists to use new algorithms in creative ways, such as the face detection code used in the software for Rafael Lozano-Hemmer’s Level of Confidence. One of the most important creative coders working today, Kyle often shares ideas and debuts projects in public before they are completed. He creatively subverts networked communication and computation, explores glitch and systemic bias, and extends these concepts to confront everything from identity to relationships.

Kyle has been an adjunct professor at NYU’s Interactive Telecommunication Program, a member of F.A.T. Lab, community manager for openFrameworks, and an artist in residence at STUDIO for Creative Inquiry at Carnegie Mellon as well as at Yamaguchi Center for Arts (YCAM) in Japan. His work is commissioned by and shown at exhibitions and festivals around the world, including NTT InterCommunication Center, Ars Electronica, Sonar/OFFF, Eyebeam, Anyang Public Art Project, Cinekid, CLICK Festival, and NODE Festival. He frequently leads workshops that explore computer vision and interaction.