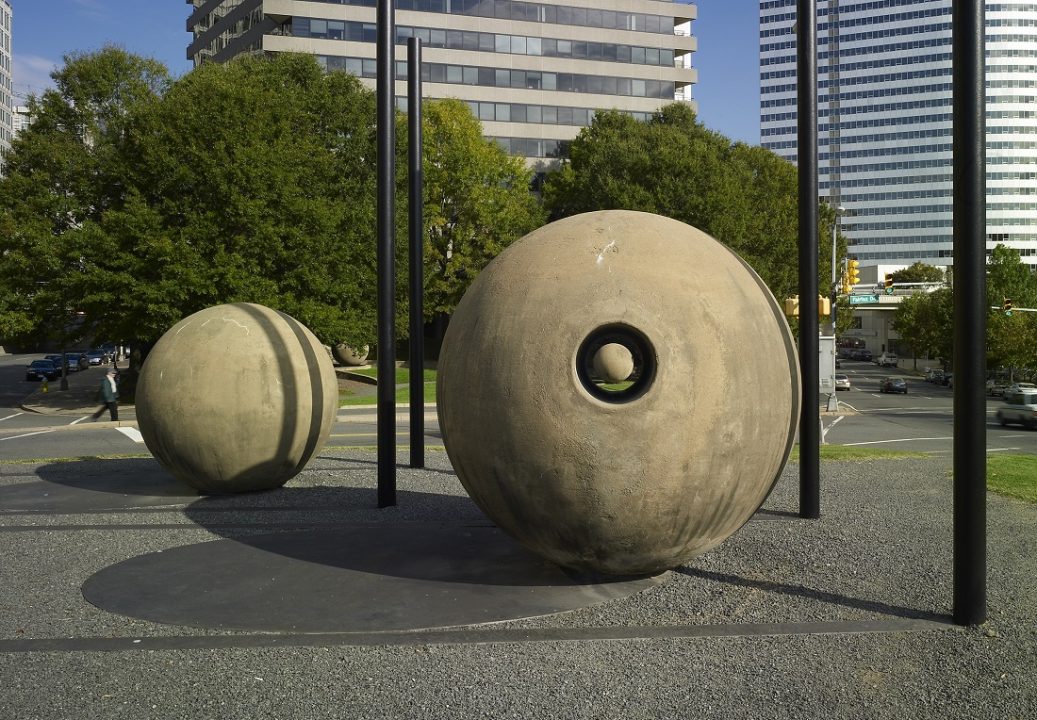 What does time mean to urban, public sculpture? The desire for permanence is often cited as one of sculpture’s long-standing and defining characteristics. In the city, longevity of sculpture is often assumed to be part of its nature, creating capacity to give durable form to ideas and extend them publicly into the future. What, though, is the role of time in public sculpture? Is sculpture in the city or in remote landscapes fixed and intransient? The answer surely is no: Sculpture is always changing.

Nancy Holt’s Dark Star Park is located in the Rosslyn neighborhood of Arlington, Virginia, and is one of the first examples of integrated public art in the United States. Holt (1938–2014) was an artist known for her earthworks, public sculpture, and installation work, with her oeuvre ranging from permanent works to ephemeral gestures. She made films, videos, photography, audio works, concrete poetry, and artists’ books. Her large-scale environmental works Sun Tunnels (1973–1976, Great Basin Desert, Utah) and Dark Star Park are her most discussed outdoor site-specific sculptures. Dark Star Park (1979-1984) is emblematic of Holt’s commitment to temporal and site-responsive sculpture. Located within a busy traffic intersection on a once-overlooked pocket of land, it features large, gunite spheres resembling fallen, extinguished stars. One section contains spheres and poles with circles inscribed in the ground acting as shadow-images. Each year at 9:32 am on August 1, the actual shadows of the spheres overlap with their shadow-images to commemorate the day in 1860 that William Henry Ross acquired the land that became Rosslyn.

Don’t miss the shadow alignment on Thursday, August 1 at 9:32 am. A new site-specific composition by Cuneiform recording artists Janel and Anthony highlight the thirty-fifth anniversary of Arlington’s seminal public artwork. Attendees are encouraged to arrive by 9:00 am.

This program is presented in partnership with Arlington Public Art, a program of Arlington Arts, and the Holt/Smithson Foundation.

Angela Anderson Adams is the founding director of Arlington Public Art, an internationally renowned, award-winning publicly and privately funded public art program where she worked directly with Holt on the first renovation of Dark Star Park.

Brett Littman is the Director of The Isamu Noguchi Foundation and Garden Museum. He has overseen more than seventy-five exhibitions and personally curated more than 20 exhibitions over the last decade, dealing with visual art, outsider art, craft, design, architecture, poetry, music, science, and literature. Most recently, he curated the 2019 edition of Frieze Sculpture New York.

Hirshhorn Museum and Sculpture Garden curator Anne Reeve is currently overseeing a major public installation of works by Lee Ufan for the Museum’s outdoor Plaza, scheduled to open in Fall 2019.

Lisa Le Feuvre leads the Holt/Smithson Foundation, a newly formed organization dedicated to the legacies of Nancy Holt and Robert Smithson. She previously directed the Henry Moore Institute, a center for the study of sculpture, until 2017.