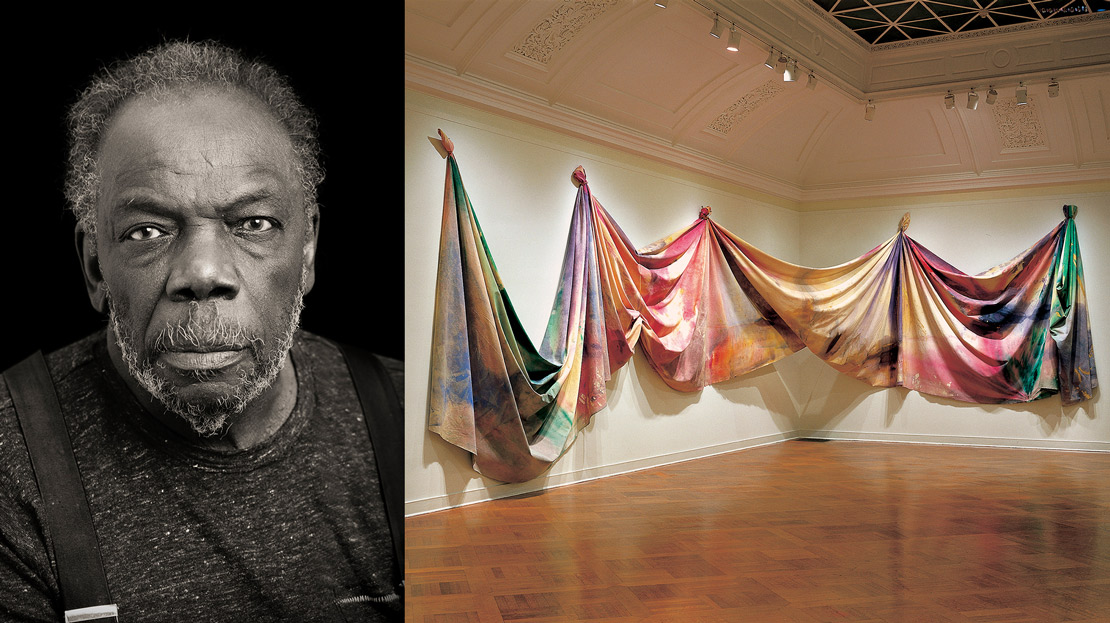 All advance tickets for this program have been claimed.

“For more than half-a-century, Sam Gilliam role-modeled creative genius, artistic breakthroughs and professional persistence. From his pictorial interpretations of draped splendor to his evocative accumulations of pigments and colors, he single-handedly reinvented painting. Sam Gilliam has made an indelible mark on modernism.” – Dr. Richard J. Powell

Coinciding with the closing of Sam Gilliam: Full Circle, the Hirshhorn Museum will convene a gathering of artists and scholars to explore the art historical legacy of Sam Gilliam, one of the most important abstract artists of the postwar era and a longtime resident of Washington, D.C.

Throughout his six-decade career, Gilliam produced an extraordinary body of work across an array of media, reflecting his lifelong engagement with both art history and the improvisatory ethos of jazz. His work has inspired artists internationally and will continue to shape the work of generations to come. Join us for a discussion of the artist’s body of work and significance.

Richard J. Powell, a recognized authority on African American art and culture (and a frequent lecturer and media commentator on this topic both in the United States and abroad), has organized numerous art exhibitions, most notably: The Blues Aesthetic: Black Culture and Modernism (1989); Rhapsodies in Black: Art of the Harlem Renaissance (1997); To Conserve A Legacy: American Art at Historically Black Colleges and Universities (1999); Back to Black: Art, Cinema, and the Racial Imaginary (2005); and Archibald Motley: Jazz Age Modernist (2014). Along with teaching courses in American art, the arts of the African Diaspora, and contemporary visual studies, he has written extensively on topics ranging from primitivism to postmodernism, including such titles as Homecoming: The Art and Life of William H. Johnson (1991), Black Art: A Cultural History (1997 & 2002), and Cutting a Figure: Fashioning Black Portraiture (2008). From 2007 until 2010, Powell was Editor-in-Chief of The Art Bulletin, the world’s leading English language journal in art history. In 2013 Powell received the Lawrence A. Fleischman Award for Scholarly Excellence in the Field of American Art History from the Smithsonian’s Archives of American Art, and in 2016 was honored at the College Art Association’s Annual Conference as the year’s most Distinguished Scholar. His forthcoming book is Going There: Black Visual Satire (Yale University Press, Fall 2020), which examines satirical cartoons, paintings, films, and videos by modern and contemporary African American artists.

Jonathan P. Binstock, Ph.D. became the seventh director of the Memorial Art Gallery (MAG) of the University of Rochester (UR) in September 2014. Since then he has led an expansion and diversification of the museum’s permanent collection, special exhibition program, public engagement and outreach efforts, and audience. With the curatorial leadership of John G. Hanhardt, Binstock introduced the art of the moving image into MAG’s collection, with commissions by media artists Isaac Julien and Javier Téllez, among other acquisitions including important works by Ja’Tovia Gary, Nam Jun Paik, Sondra Perry, and Bill Viola. MAG will unveil its next major commission, celebrated artist Rashid Johnson’s first permanent outdoor public work of art, with the completed expansion of its Centennial Sculpture Park in November 2022. A specialist in modern and contemporary art, he is the author and/or curator of, among other books and exhibitions, Meleko Mokgosi: Pax Kaffraria (2014); Sam Gilliam: A Retrospective (2005), and Andy Warhol: Social Observer (2000). In 2018 he was the co-curator of The Music of Color. Sam Gilliam, 1967–73 at Kunstmuseum Basel. Binstock is a member of the Board of Trustees of the American Federation of Arts; serves as Executive Champion for Sankofa, UR’s resource group for African American staff, and, from 2012–16, was a Scholarly Consultant and Curatorial Advisor on the development of the Visual Arts Gallery for the debut of the Smithsonian’s National Museum of African American History & Culture.

Valerie Cassel Oliver is the Sydney and Frances Lewis Family Curator of Modern and Contemporary Art at the Virginia Museum of Fine Arts. Prior to her position at the VMFA, she was Senior Curator at the Contemporary Arts Museum Houston (2000 – 2017).  She has served as director of the Visiting Artist Program at the School of the Art Institute of Chicago (1995-2000) and a program specialist at the National Endowment for the Arts (1988-1995).   In 2000, she served as one of six curators selected to organize the Biennial for the Whitney Museum of American Art in New York.  Cassel Oliver has organized numerous exhibitions including the acclaimed Double Consciousness: Black Conceptual Art Since 1970 (2005); Cinema Remixed & Reloaded: Black Women Artists and the Moving Image Since 1970 with Dr. Andrea Barnwell Brownlee (2009); and Radical Presence: Black Performance in Contemporary Art (2012). She has also mounted significant survey exhibitions for Benjamin A. Patterson, Donald Moffett, Trenton Doyle Hancock, Jennie C. Jones, Angel Otero and Annabeth Rosen. Her 2018 debut exhibition at the Virginia Museum of Fine Arts was the five-decade survey of work by Howardena Pindell entitled, Howardena Pindell: What Remains to be Seen.  The exhibition, co-organized with Naomi Beckwith, was mounted for the Museum of Contemporary Art Chicago and, named one of the most influential of the decade. At the VMFA, Cassel Oliver organized the exhibition, Cosmologies from the Tree of Life that featured over thirty newly acquired works from the Souls Grown Deep Foundation.  Most recently, she opened the exhibition, The Dirty South: Contemporary Art, Material Culture and the Sonic Impulse, to critical acclaim.  The exhibition that opened in Richmond May 2021 and is currently touring through January, 2023. Cassel Oliver is the recipient of a Getty Curatorial Research Fellowship (2007); a fellowship from the Center of Curatorial Leadership (2009); the High Museum of Art’s David C. Driskell Award (2011); the Arthur and Carol Kaufman Goldberg Foundation-to-Life Fellowship at Hunter College (2016) and the James A. Porter Book Award from Howard University (2018). From 2016-17, she was a Senior Fellow in Curatorial Studies at the School of the Art Institute of Chicago and, in Spring 2020, she served with Hamza Walker as a Fellow for Viewpoints at the University of Texas at Austin.  Most recently, Cassel Oliver was named the recipient of the 2022 Audrey Irmas Award for Curatorial Excellence from The Center for Curatorial Studies at Bard College and an awardee of the College Arts Association’s 2022 Excellence in Diversity Award. She has also received the Alain Locke International Art Award from the Detroit Institute for the Arts and the 2022 College Arts Association’s recognition for Excellence in Diversity. Cassel Oliver holds an Executive MBA from Columbia University, New York; an M.A. in art history from Howard University in Washington, D.C. and, a B.S. in communications from the University of Texas at Austin.

Lisa E. Farrington was recently awarded the coveted title of Distinguished Professor by the City University of New York (CUNY). She is founding Chair Emeritus of the Art & Music Department at CUNY’s John Jay College of Criminal Justice, coming to John Jay after 15 years as senior art historian at Parsons, the New School for Design. She was the 2007-2008 Endowed Scholar in the Humanities at Atlanta University’s historical black women’s college, Spelman, where her conference, “Hottentot to Hip Hop: the Black Female Body in Art and Visual Culture” was a critical and scholarly triumph. She earned Ph.D. & Master of Philosophy degrees from the CUNY Graduate Center, an M.A. from American University, a BFA from Howard University magna cum laude, and an Honors Degree from New York’s School of Art & Design. Her museum and curatorial experience includes the National Gallery of Art in Washington, D.C. and 10 years at New York’s Museum of Modern Art. Dr. Farrington specializes in Race & Gender in Visual Culture, African-American Art, Modern Art, and Haitian Art & Vodou Culture. Dr. Farrington has published and lectured extensively, including on-site museum lectures for Parsons Atelier of Design in Paris, France. Her  numerous awards include the Andy Warhol Foundation Creative Capital Writers Prize, the American Library Association Award for Outstanding Contribution to Literature, the Hurston Wright Literary Award for Nonfiction, and the Association of Black Women Historians Letitia Woods Brown Memorial Book Prize—the latter three given for her groundbreaking book Creating Their Own Image: the History of African-American Women Artists (Oxford University Press, 2005; 2nd edition 2011).​ Most recently, she published a second seminal book with Oxford University Press–African American Art: A Visual and Cultural History ​(2016).

Dr. Kellie Jones is Chair of the Department African American and African Diaspora Studies and Hans Hofmann Professor of Modern Art in the Department of Art History and Archaeology at Columbia University. Her research interests include African American and African Diaspora artists, Latinx and Latin American Artists, and issues in contemporary art and museum theory. Dr. Jones, a member of the American Academy of Arts and Sciences, with an honorary Doctorate from The Courtauld in London, has also received awards for her work from the Hutchins Center for African and African American Research, Harvard University and Creative Capital | Warhol Foundation. In 2016 she was named a MacArthur Foundation Fellow. Dr. Jones’s writings have appeared in a multitude of exhibition catalogues and journals.  She is the author of two books published by Duke University Press, EyeMinded: Living and Writing Contemporary Art (2011), and South of Pico: African American Artists in Los Angeles in the 1960s and 1970s (2017), which received the Walter & Lillian Lowenfels Criticism Award from the American Book Award in 2018 and was named a Best Book of the Decade in 2019 by ArtNews, Best Art Book of 2017 in The New York Times and a Best Book of 2017 in Artforum. Dr. Jones has also worked as a curator for over three decades and has numerous major national and international exhibitions to her credit.  Her exhibition “Now Dig This! Art and Black Los Angeles, 1960-1980,” at the Hammer Museum, Los Angeles, was named one of the best exhibitions of 2011 and 2012 by Artforum, and best thematic show nationally by the International Association of Art Critics (AICA). She was co-curator of “Witness: Art and Civil Rights in the 1960s” (Brooklyn Museum), named one the best exhibitions of 2014 by Artforum.

Luke Stewart is a DC/NYC-based musician and organizer of important musical presentations, and has a strong presence in the national and international Improvised Music community. He is noted in Downbeat Magazine in 2020 as one of “25 most influential jazz artists” of his generation. He was profiled in the Washington Post in early 2017 as “holding down the jazz scene,” selected as “Best Musical Omnivore” in the Washington City Paper’s 2017 “Best of DC,” chosen as “Jazz Artist of the Year” for 2017 in the District Now, and in the 2014 People Issue of the Washington City Paper as a “Jazz Revolutionary,” citing his multi-faceted cultural activities throughout DC. His regular ensembles include Irreversible Entanglements, Heroes are Gang Leaders, and Ancestral Duo, Six Six featuring guitarist Anthony Pirog, and experimental rock duo Blacks’ Myths.  As a solo artist, he has been compiling a series of improvisational sound structures for Upright Bass and Amplifier, utilizing the resonant qualities of the instrument to explore real-time harmonic and melodic possibilities. As a scholar/performer, he has performed and lectured at Harvard University, Johns Hopkins University, Medgar Evers College, George Mason University, Wayne State University, University of Montana, New Mexico State University, and the University of South Carolina. He has performed at many important venues in DC, NYC, and around the world.

The program is presented as part of Sam Gilliam: Full Circle, on view at the Hirshhorn through September 11.