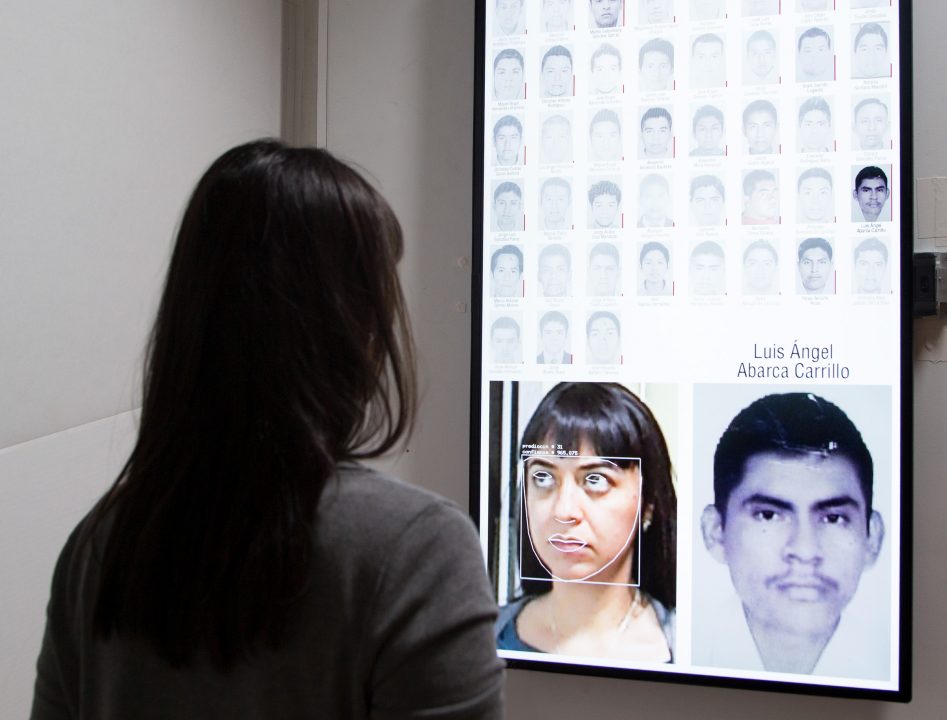 Level of Confidence is a participatory art project by artist Rafael Lozano-Hemmer, whose interactive Pulse exhibition is currently on view at the Hirshhorn. Created by artist and his studio, Level of Confidence is a response to the mass kidnapping of 43 students from the Ayotzinapa Rural Teacher’s College in Iguala, Guerrero, Mexico on September 26, 2014. It is commonly believed that the students were killed in a massacre involving both drug cartels and government forces, but their fate is still uncertain. Originally debuted six months after the kidnapping took place, the piece uses a face-recognition camera programmed to search for the disappeared students. During the five-day installation at the Hirshhorn, visitors may participate by standing in front of the camera and allowing the system to find the student whose facial features most closely match their own. The system uses algorithms to calculate the accuracy of the match as a percentage and then determines a “level of confidence” score.

The biometric surveillance algorithms used in this project are typically employed by the military and law enforcement to seek out enemies of the state. Here, however, they are repurposed to search for victims—an action that the artist characterizes as a misuse of technology that serves rather than polices the public. As the students have remained missing, and it continues to be the common belief that the students were massacred, it is unlikely that Level of Confidence will ever make a positive match. However the project commemorates the relentless search for the students that continues to this day.

Like many projects by Lozano-Hemmer, Level of Confidence combines technology and social practice to visualize complex issues through an engaging, participatory experience.