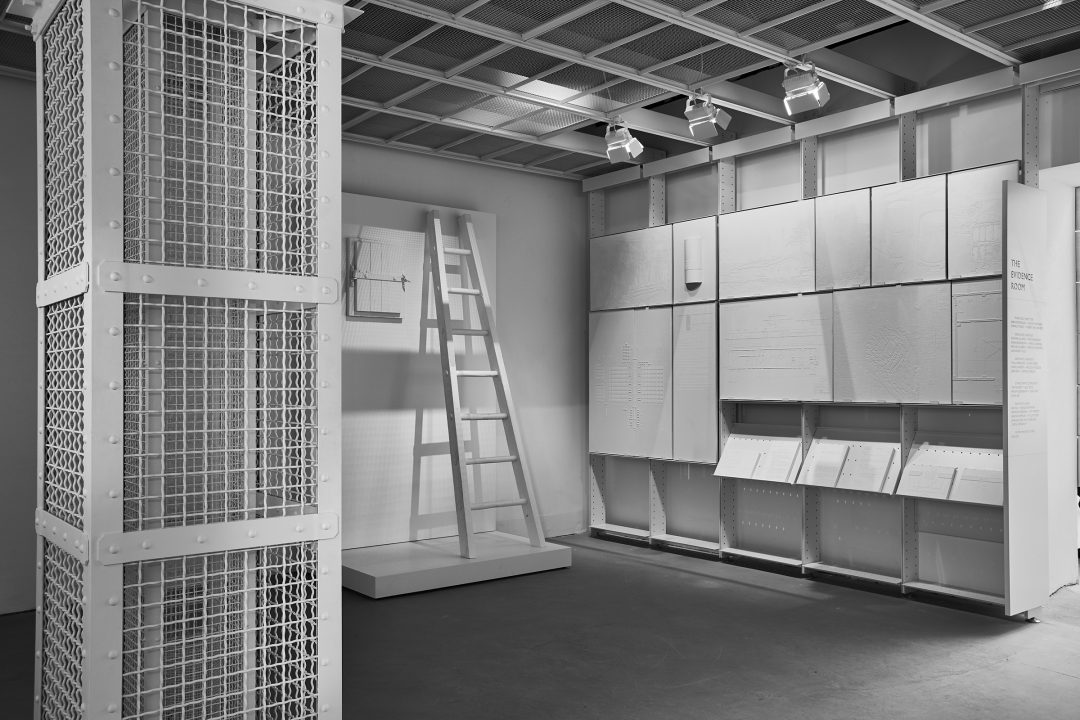 Join us for the final discussion on “Memory, History, and Representation.” The series explores the nature of truth through the lens of The Evidence Room, an installation that examines the chilling role architects played in constructing Auschwitz.

The 2016 feature film Denial and The Evidence Room are two works of art in dialogue with the same history. The movie and the installation, each in its own way, depict and remark upon the history of World War II and the legal history of a 1996-2000 libel case decided by the British High Court of Justice largely upon the basis of architectural forensic evidence. They confront terrible realities of The Holocaust and the persistent phenomenon of Holocaust denial.

Historian Elizabeth “Barry” White, filmmaker Theodore Bogosian, and attorney Amos Friedland will join Thane Rosenbaum, director of the Forum on Law, Culture, & Society to discuss the issues of fact and law argued in the case, the important implications of the legal precedent, differences between American and British libel law, and the ways that different media and genres of artistic expression affect the viewers and consumers of art.

Thane Rosenbaum is an essayist, law professor, and author. His articles, reviews and essays appear frequently in the New York Times, Wall Street Journal, Washington Post, Los Angeles Times, CNN, Haaretz, Huffington Post and Daily Beast, among other national publications. He serves as the Legal Analyst for CBS News Radio. He moderates an annual series of discussions on culture, world events and politics at the 92nd Street Y called The Talk Show. He is a Distinguished Fellow at New York University School of Law where he directs the Forum on Law, Culture & Society. His forthcoming book is entitled Crossing the Line: The High Cost of Weaponized Speech.

Amos Friedland is an attorney whose practice focuses on complex litigation, including antitrust, class action, transnational, copyright and trademark, art, and fashion. He has litigated numerous high-stakes actions for plaintiffs and defendants throughout the United States and internationally. Amos was named a New York Metro Area Super Lawyers “Rising Star” each year from 2015-2018. Before attending law school, Amos completed a doctorate in philosophy and spent two years teaching at McGill University. After law school, he helped design and teach two-week intensive summer seminars for law students on the Holocaust and contemporary ethical issues for lawyers.

Theodore Bogosian is a Emmy-winning filmmaker and television producer who has been directing, producing, and writing long-form documentaries since 1978. He has been collaborating with the Levinson/Fontana Company on network episodic drama and independent films since 1997. Bogosian and his programs have won top prizes everywhere from The National Press Club and the Chicago Film Festival to the Writer’s Guild of America, East. His documentary, The Press Secretary, was adapted into an Emmy-winning episode of NBC’s The West Wing. Among Bogosian‘s many credits and awards as director, writer, and executive producer is Genocide 101: Another Armenian Journey, which is currently in pre-production.

Elizabeth B. (“Barry”) White is currently a historian in the Division of the Senior Historian, United States Holocaust Memorial Museum (USHMM), focusing on the Holocaust and on post-Holocaust genocides, mass atrocities, and crimes against humanity. She previously worked in several capacities at the U.S. Department of Justice (DOJ) from 1983 to 2012, including as Deputy Director and Chief Historian of the Office of Special Investigations (OSI) and then as Deputy Chief and Chief Historian at the Human Rights and Special Prosecutions Section (HRSP). She has a Ph.D. from the University of Virginia and is the author of German Influence in the Argentine Army, 1900–1945, as well as numerous articles and papers pertaining to the Holocaust, postwar use of Nazi criminals by U.S. Intelligence, U.S. government efforts to investigate and prosecute Nazi persecutors, and strategies to prevent genocide and mass atrocities.

ABOUT THE EVIDENCE ROOM

The creators of The Evidence Room drew inspiration from the architectural forensic evidence presented by architectural historian Robert Jan van Pelt in a landmark libel case in 2000 as irrefutable proof that Auschwitz was purposefully designed for efficient mass murder. This groundbreaking research led to the proliferation of the use of architectural forensics, a discipline encompassing architecture, technology, history, law, and human rights. Initially commissioned for the 15th Venice Architecture Biennale in 2016, The Evidence Room recreates architectural elements of the Auschwitz gas chambers and crematoria to explore the complex nature of history, memory, and truth.