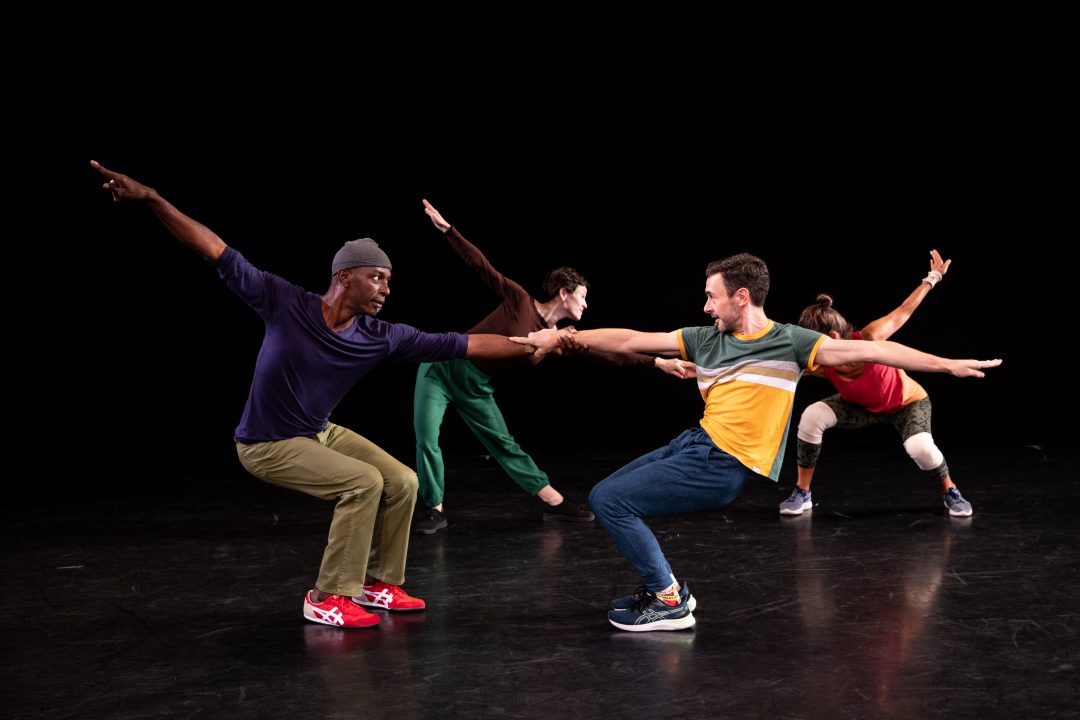 Purchase Tickets
Hirshhorn Insiders: $10*
General Admission: $20
A limited number of $5 student tickets are available for purchase. A student ID will be required at entry.

HELLZAPOPPIN’: What about the bees? is legendary choreographer and film director Yvonne Rainer’s newest dance – which she, at the age of 88, has announced will be her last.

The performance incorporates film excerpts from and movements inspired by the 1941 Hollywood musical Hellzapoppin’ and the 1933 Jean Vigo film Zero for Conduct. Rainer’s text “Dance Rant”—a monologue in the voice of the sun god Apollo losing faith in the human species—provides the soundtrack. Throughout the performance, Apollo recounts his encounters with racism on visits to Earth, while incorporating excerpts of writings from James Baldwin, Stuart Hall, and others.

HELLZAPOPPIN’ will be preceded by a screening of Rainer’s film After Many a Summer Dies the Swan: Hybrid (2002), in which the artist juxtaposes a dance she choreographed for Mikhail Baryshnikov’s White Oak Dance Project with texts by the major thinkers and artists of fin-de-siècle Vienna. Rainer’s choreography for After Many a Summer Dies the Swan initiated her return to dance after a long hiatus that had begun in 1972; like HELLZAPOPPIN’ , it represents a bookend in her career.

HELLZAPOPPIN’: What about the bees? debuted at New York Live Arts in October 2022 and is co-commissioned by Performa, the Hirshhorn Museum and Sculpture Garden, and Staatliche Kunsthalle Baden-Baden.

Transcripts will be provided upon request. If you have any questions about accessibility, please email hirshhornexperience@si.edu.

*To receive the Hirshhorn Insider discount, a membership must be active on the date of performance.

Yvonne Rainer began using projections in her performances in the late 1960s. The National Gallery of Art will host two screening events in their East Building Auditorium to celebrate Yvonne Rainer’s groundbreaking early films. The National Gallery will screen new restorations of The Lives of Performers preceded by Hand Movie on Feb. 11 at 2pm with the artist in attendance, and A Film About a Woman Who… preceded by Trio A on Feb. 25 at 2pm. Registration is required. The programs are made possible with thanks to Zeitgeist Films in association with Kino Lorber, and Video Data Bank.

Yvonne Rainer, one of the founders of the Judson Dance Theater (1962), made a transition to filmmaking following a fifteen-year career as a choreographer/dancer (1960-1975). After making seven experimental feature-length films, she returned to dance in 2000 via a commission from the Baryshnikov Dance Foundation (After Many a Summer Dies the Swan). Her dances and films have been seen throughout the U.S., Europe, and Asia in concert halls and museum retrospectives. Rainer’s publications include Feelings Are Facts: a Life; Work: 1961-73; The Films of Yvonne Rainer; A Woman Who…: Essays, Interviews, Scripts, Moving and Being Moved; and Revisions. Her awards include two Guggenheim Fellowships, a MacArthur Fellowship, a U.S.A Fellowship, and a Yoko Ono Courage Award.