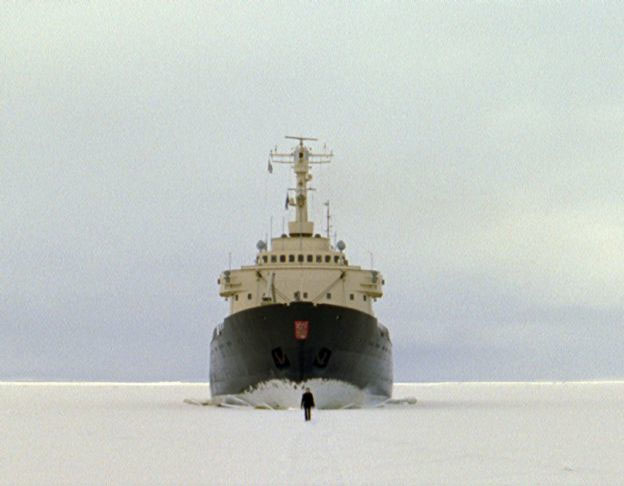 Still from Guido van der Werve, Nummer Acht (#8) everything is going to be alright, 2007. Courtesy of the artist

April 20 to November 8, 2009
Guido van der Werve (b. 1977, Papendrecht, the Netherlands; lives and works in Amsterdam) is a man of many talents and interests. An accomplished classical pianist, composer, and chess player, he studied industrial design, archaeology, and Russian before focusing on fine art—first on painting, then performance work, and finally film. By the time of this exhibition, he had completed 10 short film works that he describes as “possible scenarios of imaginary realities.”

The artist is often at the center of his elaborate and sly dramas: playing piano on a float in the middle of a lake; launching an asteroid back to where it came from; greeting a flock of ballerinas in the middle of the street; hoisting a grand piano through his apartment window; and turning slowly (in the opposite direction of the earth’s rotation) while standing at the North Pole. In Nummer Acht (#8) everything is going to be alright (2007), van der Werve plods just ahead of a gigantic ice-breaking ship as it crashes through the Gulf of Bothnia in Finland, seemingly oblivious to the huge craft at his heels. The romantic notion of his isolated and harrowing plight is made more vivid by van der Werve’s daring performance. His stride is at once quaint and ambitious, dangerous and hilarious, ridiculous and sublime. He is a stand-in for everyone who presses on despite all peril.