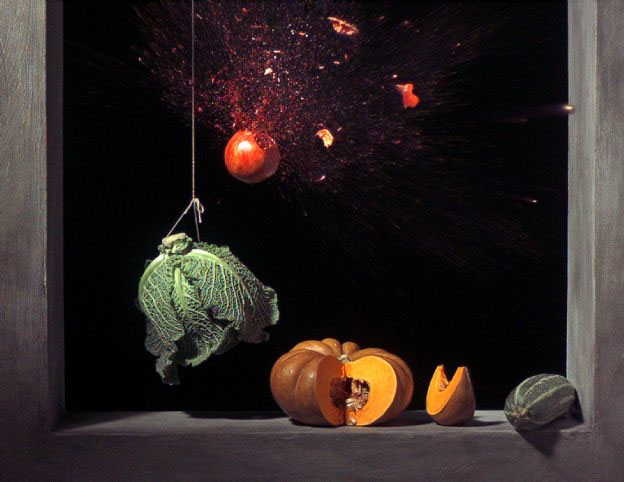 December 22, 2008, to April 12, 2009
Ori Gersht (b. 1967, Tel Aviv), who lives and works in London, is noted for his series of large-scale photographs and arresting moving-image pieces. The artist’s work encourages viewers to reflect on the power of natural beauty and how it is affected by human intervention.  In The Forest (2006), the camera pans across a lush primeval forest. Sound alternates with silence, and suddenly a tree falls to the ground with a thunderous echo. The departure point for this work seems to be the classic conundrum “If a tree falls in a forest and there is no one there to hear it, does it make a sound?” But other questions emerge: Who or what is causing these trees to fall? Is this a statement about nature and inevitability, about proverbially missing the forest for the trees, a commentary about deforestation, or a metaphor for loss? Or is it perhaps an exercise in anticipation? The Forest is soothing in its early moments yet becomes increasingly mysterious. Shot deep in the forests around Kosov that span Poland and the Ukraine, this site has personal meaning for the artist. It was from the edge of this glen that his in-laws witnessed the execution of their fellow villagers before they escaped into the woods to hide from the Nazis for two years.

The exhibition also included the flat-screen work Pomegranate (2006), installed next to the entrance to the Black Box on the lower level. This work references traditional Spanish and Dutch still-life painting in which precise arrangements of foods and fruit were shown at their peak, implying the inevitability of decay. These metaphors for the brevity of life are termed vanitas. Yet Gersht fast-forwards the impending threat of demise; his imagery does not decay by dissolving over time but instead combusts and then, in the type of slow motion used to depict extreme violence in feature films, recalls the time-lapse imagery of Harold Edgerton’s scientific action photography. Gersht updates the concept of vanitas by creating meditations on how violence, in contemporary life, is often random, anonymous, and unpredictable. Triggering a visceral response, his films translate the experiences of the artist’s fear-filled childhood in Israel into provocative statements with global resonance.

Support for the Black Box program is provided in part by Lawrence A. Cohen/Ringler Associates. Ori Gersht was made possible in part by the Embassy of Israel.

Read about Ori Gersht in the Fall 2008 issue of Hirshhorn magazine.