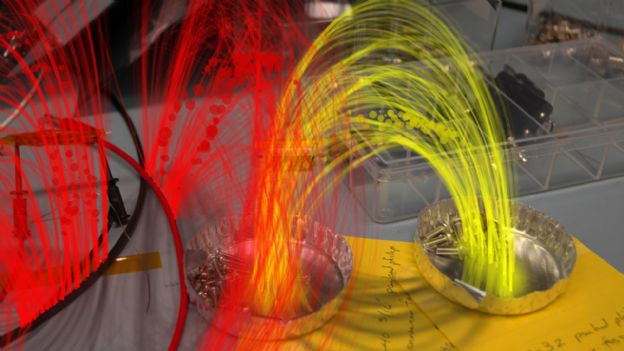 August 25 to December 14, 2008
Artists Ruth Jarman and Joseph Gerhardt, aka Semiconductor, have collaborated since 1999 on various forms of “digital noise and computer anarchy,” including films, experimental DVDs, and multimedia performances. The London-based pair make moving-image works that reveal our physical world in flux: cities in motion, shifting landscapes, and systems in chaos. They strive to transcend the constraints of time, scale, and natural forces and explore the world beyond human experience, questioning our very existence.

Featured in the Black Box is Magnetic Movie (2007), an eye-dazzling “documentary” created during the artists’ residency at the Space Sciences Laboratory at the University of California, Berkeley. The secret lives of invisible magnetic fields are exposed as chaotic, ever-changing geometries. VLF (very low frequency) audio recordings reveal recurrent “whistlers” produced by fleeting electrons, while space scientists describe their discoveries. As viewers watch the film, they wonder: Are we observing a series of scientific experiments, the universe in flux, or a documentary of a fictional world?

Magnetic Movie was awarded best film at Cutting Edge and the 2008 British Animation Awards and best experimental film at the 2007 Tirana International Film Festival. Joseph Gerhardt (b. 1972, Oxford, England) has a bachelor’s of arts in sculpture from the University of Brighton. Ruth Jarman (b. 1973, Fareham, England) has a bachelor’s in critical fine art practice from the University of Brighton.