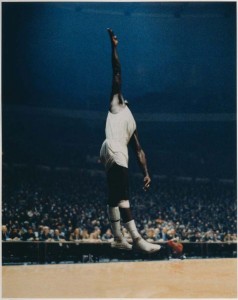 Paul Pfeiffer, Four Horsemen of the Apocalypse (8), 2005, from the Hirshhorn’s collection

October 9, 2007, to November 16, 2008
Currents featured a selection of significant works from 1967 onward, all acquired by the Hirshhorn over the preceding four years. Initially installed in November 2006, several works had been rotated recently, and thus a new installation was on view, including works by Andrea Bowers, Mona Hatoum, Ernesto Neto, Paul Pfeiffer, Robin Rhode, and Allen Ruppersberg. The works on view entered the collection in a number of ways: as gifts, as purchases proposed by Hirshhorn curators and approved by the Board of Trustees, and as purchases made through the Contemporary Acquisitions Council, a membership group that facilitates the acquisition of works by emerging artists. The selection presented reflected the great diversity of work being acquired by the Hirshhorn, ranging from conceptual photography to sculpture. Currents was organized by curator Anne Ellegood.