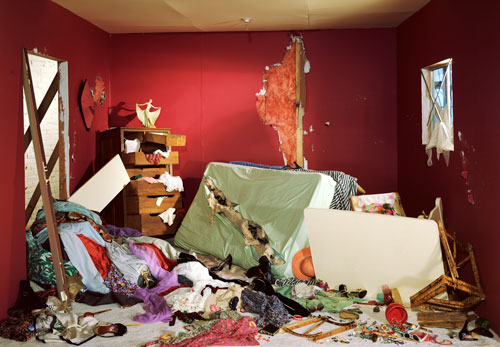 OCT 24, 2013-MAY 26, 2014 (Level 2)
While destruction is a theme that can be traced throughout art history, it has become a pervasive cultural element since the atomic age. In the immediate post-World War II years, to invoke destruction in art was to evoke the war itself: the awful devastation of battle, the firebombing of entire cities, the dropping of atomic bombs on Japan, and, of course, the Holocaust. Art seemed powerless in the face of that terrible history. But by the early 1950s, with the escalation of the arms race and the prospect of nuclear annihilation, the theme of destruction in art took on a new energy and meaning. In the decades since, destruction has persisted as an essential component of artistic expression. Damage Control: Art and Destruction since 1950 offered an overview of this prevalent motif.

Many of the earlier works in the exhibition directly record nuclear bombs or their aftermath, or employ such documentation as a starting point for broader commentary. The use of found film, television, and photography as a source expanded more widely in the 1960s as the importance of media coverage of disasters on both the cataclysmic and everyday scale increased. Other artists adopted more conceptual or symbolic approaches to address the potential for destruction in the world or as a reaction to social conventions. Destruction has also been employed as a means of questioning art institutions or challenging the very meaning of art itself. In many of the artworks on view, regardless of time period, medium, or intent, the desire to control destruction or to emphasize the integral relationship between construction and destruction is central.

But whether as rebellion or protest, as spectacle and release, or as an important facet of re-creation and restoration, it is apparent that for generations of artists internationally, destruction has served as an essential means of considering and commenting upon a host of the most pressing artistic, cultural, and social issues of our time.