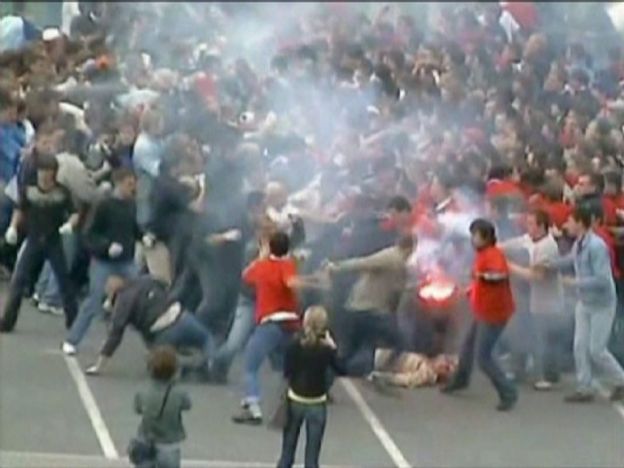 Stills from Cyprien Gaillard and Mario Garcia Torres’s exhibition. Courtesy of the artist

November 10, 2010, to March 27, 2011
Cyprien Gaillard (French, b. Paris, 1980) and Mario Garcia Torres (Mexican, b. Monclova, 1975) represent a new generation of conceptual artists who examine the architectural and artistic “ruins” of the recent past. Both investigate idealistic historical movements, raising the provocative question of whether the convictions and achievements of today’s artists, architects, and theorists will prove any more enduring than those of previous generations.

Gaillard has wandered from Chernobyl to Detroit documenting the collapse of the physical structures and utopian ambitions of 20th-century architecture using Polaroid photography—itself a medium fading into obsolescence. These works, along with video shot by the artist and found footage from the Internet, confront the domineering soullessness of buildings conceived to tame humanity into rational, contented communities. The tendency to abandon and obliterate rather than fix these failed structures is equally a theme of Gaillard’s work.

An “expedition” to Saint Croix to see firsthand a mosaic commissioned from and eventually disavowed by the celebrated French conceptualist Daniel Buren was the subject of Garcia Torres’s installation at the Hirshhorn. Having also produced pieces about the legacy of Michael Asher, Robert Barry, Alighiero e Boetti, and other artists recognized for their avant-garde approaches, Garcia Torres found Buren’s decorative mosaics and the resort for which they were made in an advanced state of decay. As he often does, Garcia Torres conveyed his findings in a slide show, using a dying technology once strongly associated with the classroom to ask questions about art’s permanence and universality rather than applying worn-out conventions and canons to the contemporary period.

The exhibition was organized by guest curator Kristen Hileman, curator of contemporary art at the Baltimore Museum of Art.

Directions: Cyprien Gaillard and Mario Garcia Torres was organized by the Hirshhorn Museum and Sculpture Garden and was made possible in part by EDF and contributions to the Hirshhorn’s Annual Circle. This program received Federal support from the Latino Initiatives Pool, administered by the Smithsonian’s Latino Center.