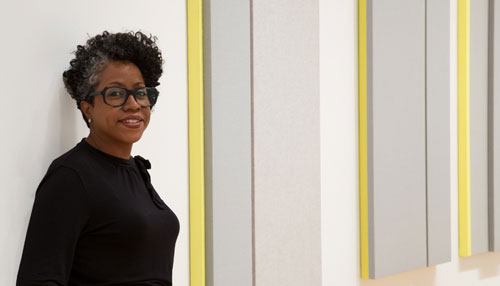 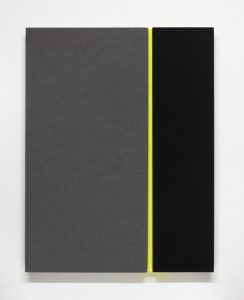 Music, art history, and African American culture intermingle in the art of Jennie C. Jones (American, b. 1968, Cincinnati, Ohio; lives and works in Brooklyn, New York), who creates audio collages, paintings, sculptures, and works on paper that explore the formal and conceptual junctures between modernist abstraction and black avant-garde music, particularly jazz. Repurposing what she terms “the physical residue of music”—the devices and packaging that structure listening, such as headphones, audiotape, and cassette cases—Jones has produced readymade sculptures that reflect upon the passage from analog to digital while also highlighting an abstract vocabulary that links these functional objects to modern art ranging from Russian Constructivism to Minimalism. She also has created innovative sound works that recompose historical recordings by black composers and performers through microsampling, a digital editing methodology that extracts individual notes and short phrases and then recombines them using looping, stretching, and repetition, as well as the addition of silent expanses. The resulting audio collages encourage us to imagine a more subtle and complicated relationship between dominant and African American modernisms.

Higher Resonance was an immersive installation that reflected the extension of Jones’s practice to include acoustics and architecture. Riffing on the Hirshhorn’s iconic round structure, Higher Resonance featured an acoustic intervention that took the form of a listening area shaped by a new offset wall mirroring the curve of the existing gallery space. Carefully interspersed along the walls were Jones’s Acoustic Paintings, rectangular monochromatic panels constructed from industrial soundproofing materials. The Acoustic Paintings, even as they visually reference the graphic forms of both musical notation and Minimalist art, challenge a key painting precept by shaping the sound to envelop the listener. The project’s sound component explored the myriad cultural connotations of abstraction’s transcendence through samples of African American avant-garde music from the 1970s to the present, including the work of composers and performers such as Olly Wilson, Alvin Singleton, Wendell Logan, the Art Ensemble of Chicago, Rahsaan Roland Kirk, and Alice Coltrane.