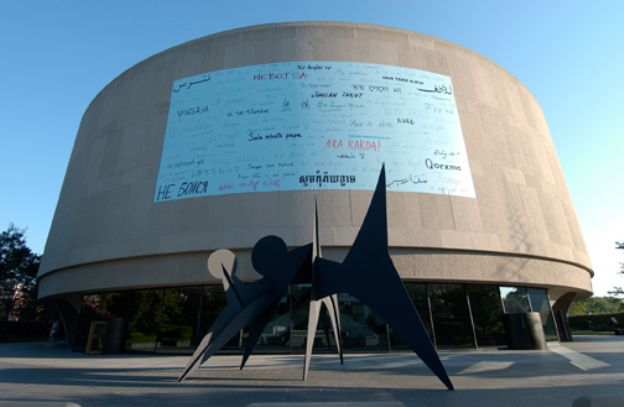 August 19, 2005, to April 13, 2006
As part of the Hirshhorn’s ongoing Directions series, a billboard by New York-based artist Jim Hodges (American, b. Spokane, Washington, 1957) was installed on the façade of the building from August 19 into the spring of 2006. Hodges invited international delegates to the United Nations to translate, in their own language and handwriting, the phrase “don’t be afraid.” The artist then reproduced and combined the many versions of the phrase in a large-scale commercially printed billboard, which can be resized and reprinted to fit multiple venues. The version at the Hirshhorn stretched 35 by 70 feet across the building above the Museum’s main entrance on Independence Ave. Visitors were invited to view a documentary of the artist and reflect upon the work of Jim Hodges in the new contemplation space in the Museum lobby.

The artist first incorporated the phrase “don’t be afraid” into a small three-dimensional drawing in 2000, in which it had the highly personal connotation of reminding the artist to have courage in making his own work. The words reappeared in the more public format of a bumper sticker produced by Hodges in conjunction with the catalogue accompanying the 2004 Whitney Biennial. In its present incarnation, a “global chorus” (the artist’s words) expresses the reassuring phrase in response to an unspecified distress, allowing viewers to develop interpretations of its meaning that might range from the personal to political. Given Washington, DC’s, role in international affairs, the placement of “don’t be afraid” at the Hirshhorn uniquely reflected and connected to the diverse group of people living in the city and offered a message to guide thinking about the United States’ relationships with other nations.