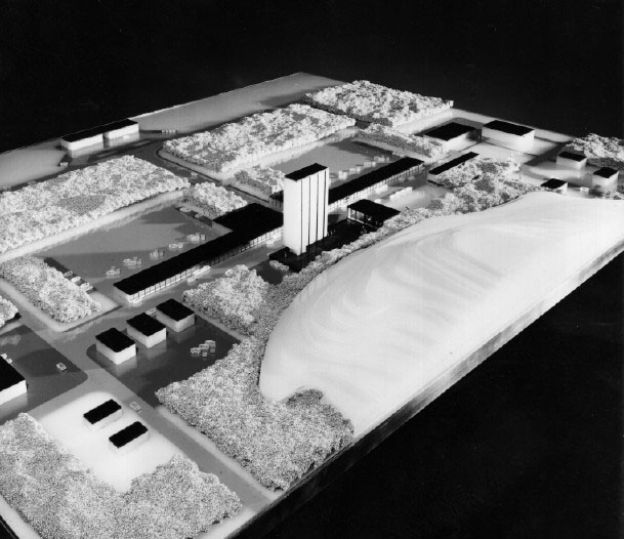 November 5, 2008, to March 22, 2009
Terence Gower’s project Public Spirit grew out of his research into the history of the museum during his 2007 artist fellowship with the Smithsonian. The exhibition tells the story of the original proposal for the Hirshhorn Museum, which founder Joseph Hirshhorn envisioned as the centerpiece of a utopian “town of culture” planned for the wilderness of western Ontario, Canada. In the mid-1950s, Hirshhorn enlisted architect Philip Johnson to design the town, and although the project was never realized, photographic documentation of his architectural model still exists. Gower used these photos, along with other documentation of the plans for the town and Ezra Stoller’s photographs of the Gordon Bunshaft-designed Hirshhorn Museum and Sculpture Garden, for his material.

Public Spirit included a digitally animated video projection that took visitors on a tour of the proposed town (including the museum, where Gower hung an imagined exhibition) and the surrounding landscape. The project also contained a large-scale sculptural model of two buildings within Johnson’s plan and a series of posters incorporating imagery and text related to the history of the Hirshhorn Museum, its collection, and its founding collector. Building upon his previous explorations of modernism in the context of architecture, Gower’s Public Spirit explored the optimism of the Modernist utopia, the ideological complexity of public and private space, and the relationship between industry and philanthropy.

Directions: Terence Gower: Public Spirit was made possible in part by Trellis Fund and the Peter Norton Family Foundation.

The artist wishes to thank the Graham Foundation for Advanced Studies in the Fine Arts, the Smithsonian Artist Research Fellowship program, and Sticky Pictures for their support of this project.

“Hirshhorn Looked into the Wild for a Place to Build His Museum,” Washington Post, November 10, 2008 (PDF)

Our Sculpture Garden is open. Our building and plaza are temporarily closed. Learn more.
+