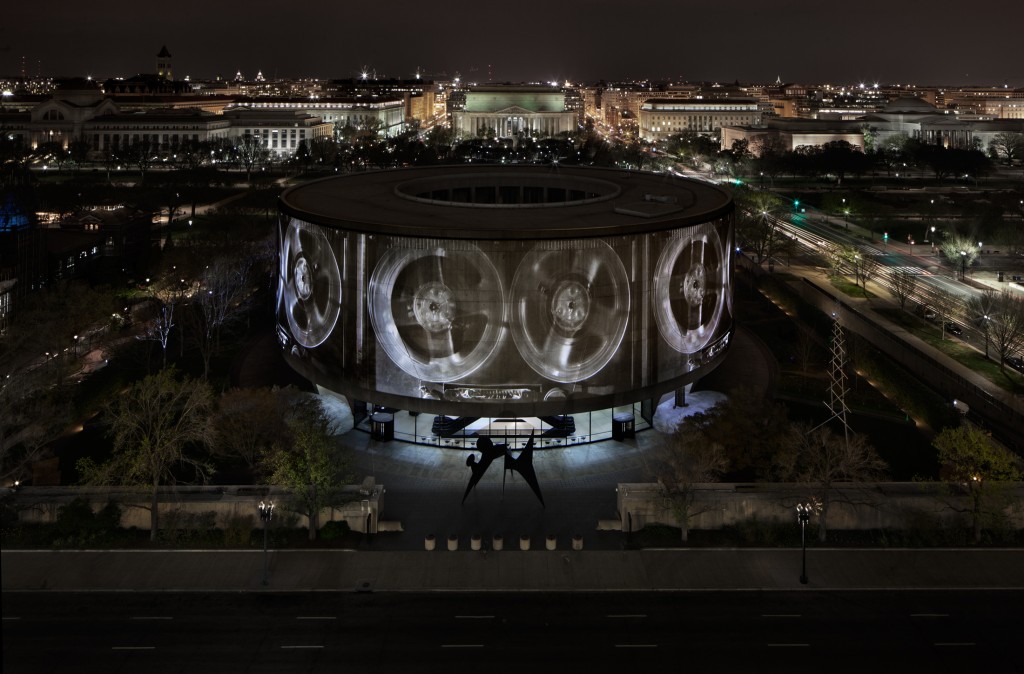 This work, which Aitken considers “a reflection of contemporary reality,” altered the relationship between the museum building and its urban environment. “The building is at times emphasized and at times disappears completely into the content of the artwork,” he wrote. At these latter moments, the structure receded into cinematic space, rotating, rising and evolving into new forms.

The interaction between performance and environment is a central concern of the artist, not merely in the fictional space of the film, but also in physical space with the viewer. As SONG 1 was an exploration of the contemporary condition, Aitken employed a broad cross-section of performers in order to realize this vision, with contributions coming from well-known personalities such as actress Tilda Swinton; musician John Doe, from the Los Angeles punk band X; and avant-folk singer Devendra Banhart, as well as street dancers, members of underground bands, gospel singers, and a host of other nonactors.

Aitken structured SONG 1 around “I Only Have Eyes for You,” a pop standard written in 1934 that melds an ultraminimal statement of desire and dedication with an unforgettable composition. In order to emphasize the universality of the song, dozens of versions of it were specially created for SONG 1 by a stylistically diverse group of musicians, including Beck, James Murphy of LCD Soundsystem, Banhart, Mountains, CFCF, High Places, No Age, and Lucky Dragons.

SONG 1 was a continuous experience; it was unlikely that anyone would perceive it the same way twice. The piece, which was impossible to see in its entirety from a single vantage point, compelled the viewer to walk around it in order to experience different visuals and parts of the related sound mix. Wherever the Hirshhorn was visible, SONG 1 was on view.

Organized by Hirshhorn deputy director and chief curator Kerry Brougher, the exhibition was accompanied by a fully illustrated artist’s book containing essays by Brougher, rock critic Barney Hoskyns (author of books including Waiting for the Sun: Strange Days, Weird Scenes, and the Sound of Los Angeles, 1996), and Dean Kuipers (an editor at the Los Angeles Times who writes often on music and collaborated with Aitken on the book I Am a Bullet: Scenes from an Accelerating Culture, 2000).

The extension of Doug Aitken: SONG 1 was made possible by the generous support of The American Institute of Architects and WorldStage, Inc.