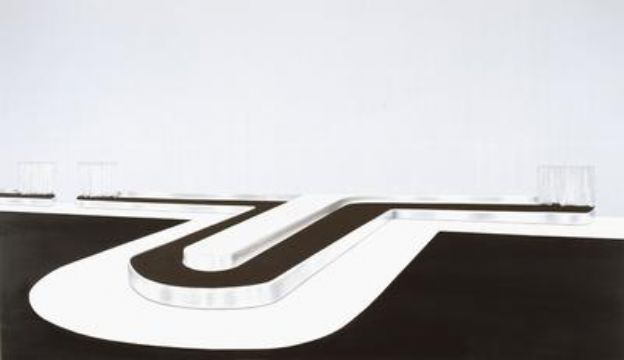 October 21, 2010, to January 16, 2011
Since his first exhibition at the age of 13, Guillermo Kuitca (Argentinean, b. Buenos Aires, 1961) has forged a distinctive path as an artist, creating visually compelling works that reflect his intense and often ambivalent relationship to his primary medium: painting. Guillermo Kuitca: Everything was the first comprehensive survey of the artist’s work in the United States in more than 10 years, and was co-organized by the Hirshhorn; Albright-Knox Art Gallery, Buffalo, NY; and the Miami Art Museum. Examining the artist’s continuing development between 1980 and 2008, the show presented the spectrum of Kuitca’s 35-year career, from early pieces inspired by his experience in theater, with titles often drawn from music, to recent complex abstractions that evoke the history of modern painting. Included were pieces from all of Kuitca’s major series as well as a range of his works on paper, which have played an important role in the evolution of his painting.

The exhibition was accompanied by a catalogue that provides significant essays documenting the artist’s thematic groupings, addresses his relationship to drawing, a previously unexplored aspect of his work, and presents extensive interviews with the artist conducted in 1997 and 2008.

Since the early 1980s, the artist’s work has been characterized by recurring imagery, most notably spatial and mapping motifs. Central among these are images of theater sets and seating charts, architectural plans, road maps, beds, numerical sequences, and baggage-claim carousels, through which Kuitca explores universal themes of migration and disappearance, the intersection of private and public space, and the importance of memory. His prolific career encompasses a diverse body of work that inspires viewers to contemplate their relationship not only to the piece in front of them, but also to their place within individual spaces and the larger world.