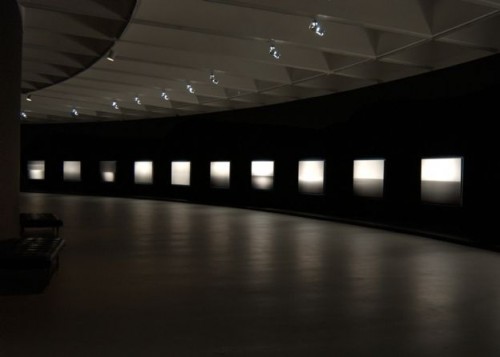 Installation view of Hiroshi Sugimoto, 2006, at the Hirshhorn Museum and Sculpture Garden

February 16 to May 14, 2006
The Hirshhorn Museum’s Hiroshi Sugimoto was the first career survey of one of Japan’s most important contemporary artists. Sugimoto (b. 1948, Tokyo) is known for his starkly minimal images of seascapes, movie theaters, and architecture, as well as his richly detailed photographs of natural history dioramas, wax portraits, and Buddhist sculptures. These celebrated series explore such essential concepts as time, space, culture, and perception – even the nature of reality itself.

This retrospective of his decades-long career, featuring approximately 120 photographs from 1976 to 2006, was co-organized by the Hirshhorn and the Mori Art Museum, Tokyo, and co-curated by Hirshhorn Director of Art and Programs and Chief Curator Kerry Brougher and Mori Director David Elliott. The presentation at the Hirshhorn Museum and Sculpture Garden was made possible in part by the Holenia Trust in memory of Joseph H. Hirshhorn, the Hirshhorn’s Board of Trustees, and contributions from Hirshhorn patrons.

Using a large-format camera and, for the most part, black-and-white film, Sugimoto has created images that stimulate both intellect and vision, often capturing what is elusive to sight: the horizon line between sky and sea at night; the sum total of light projected during a feature-length film; and the physical contours of the principle represented by a mathematical equation. His work also points to the human impulse to represent reality, a drive that has inspired artists throughout history and is embodied in photography itself. Six photographs by Sugimoto have entered the Hirshhorn’s collection since 2003, including his powerful image of New York City’s World Trade Center towers and works from the Theaters series. On the museum’s second level, two videos provided further insight into Sugimoto’s vision: his Accelerated Buddhas was shown along with a brief profile from the acclaimed PBS series Art 21. This exhibition traveled to the Modern Art Museum of Fort Worth from September 17, 2006, through January 21, 2007.

Hiroshi Sugimoto was organized by the Hirshhorn Museum and Sculpture Garden, Smithsonian Institution, Washington, DC, and the Mori Art Museum, Tokyo. The presentation at the Hirshhorn was made possible in part by the Holenia Trust in memory of Joseph H. Hirshhorn, the Hirshhorn’s Board of Trustees, and contributions to the Annual Circle. Support for the opening reception was provided by Okunomatsu Sake Brewery Co., Ltd. In-kind support of the international tour was provided by Japan Airlines.