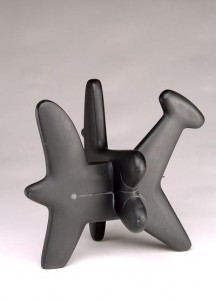 February 10 to May 8, 2005
This exhibition was the first museum show in more than 30 years to focus on Noguchi’s sculpture, bringing together more than 50 sculptures and nearly 30 works on paper, including rarely seen pieces. The son of a Japanese poet and an American writer, Isamu Noguchi (1904-1988) drew upon numerous cultural sources to create works characterized by poetic metaphor and technical mastery. Seeking spiritual expression and material innovation, he advocated carving in stone and wood, yet experimented with diverse and unusual materials, such as paper, string, magnesite, chrome, plastic, and electric lights. Curated by the Hirshhorn’s Valerie Fletcher and co-organized by the Hirshhorn and the Whitney Museum of American Art, New York, the exhibition was accompanied by an illustrated 240-page catalogue. The Hirshhorn’s presentation was made possible in part by the Holenia Trust in memory of Joseph H. Hirshhorn; Melva Bucksbaum and Raymond Learsy; and the Jim and Barbara Demetrion Endowment Fund.