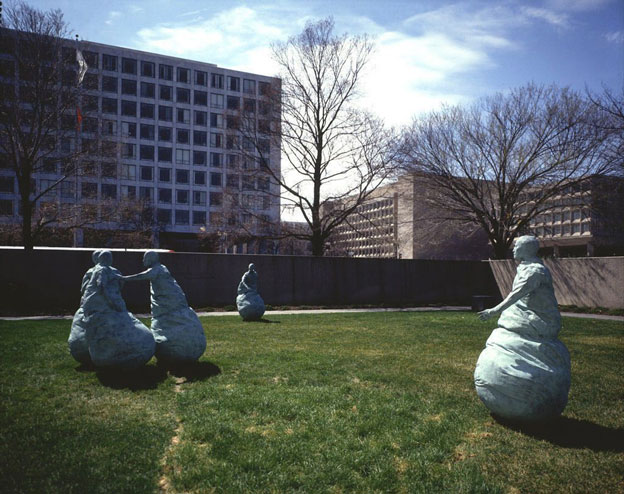 October 18, 2001, to January 13, 2002
Spanish sculptor Juan Muñoz (b. Madrid, 1953-2001), whose sudden death in August 2001 shocked the art world, was here honored with his first full retrospective in the United States. Included were nearly 60 sculptures, multifigure installations, drawings, and paintings spanning Muñoz’s career from the mid-1980s to the end of his life.

Muñoz had had major exhibitions at museums and in outdoor installations throughout Europe. Launching a national tour from the Hirshhorn, this exhibition included works infrequently seen on this continent – images of empty domestic interiors, banister sculptures, and a streetlike passage lined by smaller than life-size iron balconies and hotel signs – as well as the bronze and cast-resin figures for which he was best known.

Engaging viewers physically and emotionally, Muñoz’s figures lean secretively toward one another, form a tight clique on a living-room settee, peer down at us from a high balcony, or smile as they ride a toy train. A 550-pound bronze figure, specially created by Muñoz for the Hirshhorn’s architecture, hung upside-down on a guywire three stories above the Museum’s circular outdoor fountain, its falling posture creating a theatrical tension.

This exhibition was organized by the Hirshhorn in association with the Art Institute of Chicago and traveled after Washington to Los Angeles, Chicago, and Houston. It was accompanied by a full-color catalogue with essays by the show’s curator, Neal Benezra, the deputy director and Frances and Thomas Dittmer Curator of Modern and Contemporary Art at the Art Institute; Olga Viso, the Hirshhorn’s curator of contemporary art; and New York-based art critic Michael Brenson. Also included was an interview by Paul Schimmel, chief curator, Museum of Contemporary Art, Los Angeles.

Corporate support was provided by Terra Networks with major assistance from Aaron and Barbara Levine. Armstrong World Industries, Waterjet Works, and Flooring Solutions Inc. provided in-kind assistance with the special flooring installations. The catalogue was underwritten in part by the Sociedad Estatal de Acción Cultural Exterior of Spain and Mr. Borja Coca. In Washington, public programs were sponsored in part by the Latino Initiatives Fund, administered by the Smithsonian Center for Latino Initiatives.