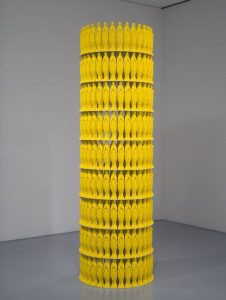 February 4 to May 27, 2013
Drawn from the Hirshhorn’s collection, this exhibition brings together works that use the processes of copying, faking, and duplicating as strategies of artistic invention. The artists do not aim to create an original; rather they follow in the tradition of Marcel Duchamp, who famously designated ordinary mass-produced objects as “Readymade” works of art, and Jasper Johns, who, in the late 1950s, chose to paint images “the mind already knows,” such as targets and the American flag. The artists in this exhibition similarly adopt commonplace items and established images as their points of departure. The results are both recognizable and strange, existing somewhere between realism and fantasy.

Sculptures such as Robert Gober’s oversized stick of butter and Christo’s sealed-off storefront present mundane objects transformed in ways that make them mysterious and evocative. Others are invented forms, such as Richard Artschwager’s abstract Formica relief, which alludes to the scale and material of everyday furniture but is decidedly non-utilitarian. Many of the pictorial works in the exhibition reference photographic images rather than direct reality, thereby drawing attention to a multilayered process of representation. Vija Celmins’s carefully rendered graphite drawing, Untitled (Double Moon Surface), for example, is a picture of a picture, not a picture of the moon.

There is something real and yet not real about these various works that compel the viewer to look more closely. By rendering the familiar strange, they reveal the unspoken meanings of ordinary things.