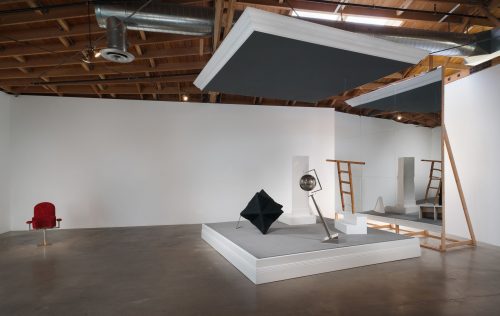 OCT 29-FEB 15, 2016 (Second Level)
Shana Lutker (American, b. 1978, Northport, New York; lives and works in Los Angeles) was featured in a new solo exhibition that focused on stage set–like installations of sculptures based on historic fistfights involving Surrealist artists. The installations were organized in chapters corresponding to those in a book, Le “NEW” Monocle.

Lutker explores the avant-garde milieu of Paris in the 1920s, a place and time in which radical artistic ideas occasionally met with physical violence and artists sometimes attacked one another to defend ideologies and honor. “Shana Lutker melds her conceptual interests with an uncanny sculptural sensibility,” said Hirshhorn assistant curator Mika Yoshitake, who organized the exhibition. “She draws on dreams, memory, and her understanding of history to produce objects that exert a powerful pull on the unconscious mind. All of her work, including her writings and performances, grows out of a process that emphasizes not only historical research, but also her deep personal engagement with the stories she tells.”