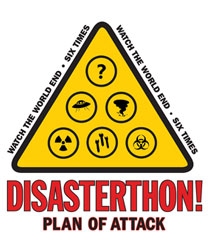 In celebration of the last weeks of Damage Control: Art and Destruction Since 1950, disaster epics will be featured throughout the day and evening, culminating in a crowdsourced favorite determined by SurveyMonkey polling. Watch the best (and sometimes worst) B-movies ever to dish up catastrophe on a cinematic scale. There will be a number of contests, with prizes awarded from the Ring stage. Take home top honors for the best homemade, disaster-inspired hat or the most artfully composed justification for a flick’s inclusion in the pantheon of disaster film. Marathoners who watch all six flicks will receive a special prize for endurance. This is one event where no one will tell you to put away your phone—join us as we live-tweet throughout the day.

Admission is free, and seating will be first-come, first-served. Films may include adult content.

ABOUT THE VOTING
At hirshhorn.si.edu/DISASTERTHON, disaster movie fans can vote for the Most Epic Disaster Movie of All Time. Twenty-five titles are suggested, but disagreement is encouraged. Will the absurd comedy of Stanley Kubrick’s anti-war masterpiece “Dr. Strangelove” (1964) trump the ominous rumblings of the Sensurround-pioneering “Earthquake” (1974)? Can the relentlessly morphing villain of James Cameron’s “Terminator 2: Judgment Day” (1991) best the airborne terror that is “Sharknado” (2013)? Or will a dark horse emerge from a pack of write-ins? Find out when the winning film hits the screen at 10 p.m., closing out the marathon with a bang.

First-, second- and third-place prizes will be awarded for Civil Defense, in which online voters craft persuasive defenses of their film faves. This is the only contest in which participants need not be present to win. Disaster fans who live in fortified bunkers 300 feet underground can vote online and follow DISASTERTHON! on Twitter to find out if they’ve won.

Hat-astrophe celebrates the creativity of gold-, silver- and bronze-medal crafters of disaster-themed hats. No flammables, liquids or hazmats are allowed in the museum—just good fun and a chance to outshine your rivals at the evening vernissage!

Viewers who come for the first film will receive a Passport to Disaster. At the end of each movie, a specially designed rubber stamp (biohazard symbol, radioactivity warning symbol, etc.) will confirm attendance. Those who grind all the way through to the bitter end will receive not only a fully stamped Passport to testify to their stick-to-itiveness but other fabulous prizes!

All screenings are in the Ring Auditorium. Visitors requesting accessibility services, such as a sign-language interpreter, should contact Kristy Maruca at 202.633.2796 or marucak@si.edu. Please try to give two weeks’ notice.

Members at the Inner Circle ($500) level and above may reserve two seats per public program at the Museum.  To check on the status of your membership or to RSVP, please email hirshhornevents@si.edu or call 202.633.2836.