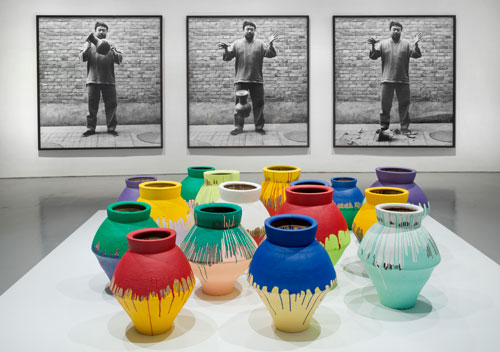 The Hirshhorn will offer a range of educational programs in conjunction with the exhibition Ai Weiwei: According to What? on view at the museum October 7th through February 24th, 2013. All programs are free of charge.

Marathon screening of films by and about Ai Weiwei.

Recently named Design Miami’s Designer of the Year, Vito Acconci will give a talk titled My Own Ai Weiwei, addressing his 2008–2010 collaboration with Ai Weiwei at Para/Site Art Space in Hong Kong. Born in 1940 in New York, where he lives and works, Acconci began writing poetry in the 1960s. His daring explorations of the use of public space earned him recognition as one of the pioneers of installation, performance, and video art. In 1988 he founded an architectural practice, Acconci Studio, which works toward constructing a critique of the built environment.

Friday Gallery Talk: Larissa Raddell discusses the installation process of Ai Weiwei: According to What?
Friday, January 11, 2013
Meet at the Information Desk

Hirshhorn exhibition coordinator Larissa Raddell discusses the installation process of Ai Weiwei: According to What?

Georgetown University assistant professor Michaelle C. Wang on ceramic pieces in Ai Weiwei: According to What?

This film documents an artwork produced for Documenta 12 in which Ai invited 1,001 Chinese citizens of various ages and backgrounds to come to Kassel, Germany, during the exhibition and examine their dreams for the future, as well as the artist’s own. The film has English subtitles and runs 152 minutes.

Ai’s film documents the undertaking and aftermath of the artist’s journey to witness the identification of the bodies of students killed during the 2008 Sichuan earthquake. Thousands of children died in their schools as a result of corruption that enabled poor construction and lax inspections. During a confrontation with police in a hotel in Chengdu, Sichuan province, the artist was beaten about the head. Shortly thereafter, while flying to Munich to prepare the exhibition from which the film takes its title, he suffered a brain hemorrhage. Upon landing, he was rushed into emergency surgery that saved his life. The film has English subtitles. Yentob’s film, which was produced for the BBC, reviews Ai’s career leading up to his installation of 100 million hand-painted porcelain sunflower seeds in the Tate Modern’s Turbine Hall. Total running time is 120 minutes.

Fresh from college, Klayman ventured to China, where she bounced between jobs and, as an incidental side-gig, shot a brief video to accompany an exhibition of photographs by Ai. The project grew into a feature-length portrait that delves into the artist’s influences (Joseph Beuys and Marcel Duchamp, among others), his devotion to his mother and father (Ai Qing, a poet suppressed first by anti-Communists and then under Mao), his process (perpetual performance, public engagement through social media, the conceptual transformation of traditional aesthetics) and the hazards of surviving as a dissident artist. She’ll share the details, introduce the film and answer questions.

This panel discussion concentrates on questions of freedom and creativity and addresses the various conditions that lead great minds to bold actions. Of particular interest is the role of the dissenting artist in confronting established doctrines and social orders in the face of official censorship and repression. More Event Details

NPR: In ‘According To What?’ Ai Weiwei Makes Mourning Subversive
January 23, 2013