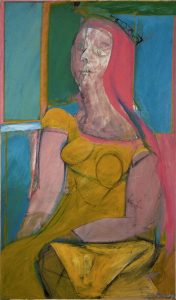 Queen of Hearts (fig. 1), painted over three years between 1943 and 1946, is an important transitional work that both evidences de Kooning’s rigorous training and heralds his signature Women of the late 1940s and ’50s. Examination and technical analysis of the painting reveals that it evolved through a series of clearly discernible stages that reveal a curious fusion of traditional approaches to picture-making with the less conventional materials and practices characteristic of much of the artist’s later work.

Seated Woman, a graphite drawing on paper in the collection of the Philadelphia Museum of Art, served as a preparatory study for Queen of Hearts. The fragmentation of the figure evident in the painting was conceived here, and an infrared photographs of the painting show an underdrawing of brushy lines around the figure; and, near the lower left corner a heart-like shape that is faithful to the study, but which the artist chose to overpaint (fig. 2). De Kooning began Queen of Hearts itself by laying down a traditional gesso ground, over which he probably used ink or a fluid black paint to sketch in the basic elements of the figure from the pencil drawing.1 In the final painting he eliminated the woman’s hair and added an ear, then largely covered it over, leaving it still slightly visible beneath the paint of the pink veil. The drawing also contains a heart-like shape in the lower-left corner that infrared photography reveals was included in the painting’s underdrawing but that the artist covered over.

Although Queen of Hearts shows little evidence of the scraping and reworking characteristic of many of de Kooning’s paintings of this period, he arrived at its final color scheme only after significant revisions. Over the preliminary drawing, he blocked in the rectangles of the background with a brush, applying the different colored paints around the reserved area of the figure. A cross-section of the upper left corner reveals four distinct paint layers over the white ground (fig. 3): de Kooning first rendered this area in two layers of yellow, followed by a layer of pink, and finally a layer of blue-green paint.2 From this sample and others taken from the painting, it is evident that the artist worked on the background over an extended period of time, building up the paint layers in distinct stages and only after the previous layer had dried.3 Until the mid-1940s, de Kooning generally made the surfaces of his paintings smooth and somewhat glossy, and his choice of paints was important in achieving these porcelainlike surfaces. Medium analysis indicates that the binding medium of the paints in Queen of Hearts was a drying oil, probably linseed (fig. 4).4 That identification, in conjunction with pigment analysis, supports conjecture that the paints in this picture are artists’ tube paints. The yellow, red, and orange paints are all relatively expensive cadmium pigments, with none of the resins and only small amounts of the fillers and extenders commonly found in house paints of the period.

Examination also reveals that de Kooning was relying on his technical training, specifically his experience with sign painting, to achieve his glossy surfaces. Fine circular striations in the green and blue background rectangles indicate that he enhanced the smooth surfaces of the oil paint by rubbing them with pumice stone or fine-grit sandpaper, then coated them with a layer of natural resin (fig. 5).5 Sign painters who wanted a highly polished background on which to apply their lettering generally rubbed down the painted surface with lump pumice and water to remove all brushstrokes, after which the sign was given a coat of clear or tinted varnish.

Examination of Queen of Hearts with a microscope indicates that de Kooning painted the figure only after completing the background and that here he took a very different approach, ignoring conventional techniques of painting in favor of a more immediate handling of the materials. For the woman’s disconnected arms and head, he used the broad, sharp blade of a tool such as a metal scraper to apply a layer of white lead paint directly over the white gesso ground, overlapping the edges of the surrounding green and blue background (fig. 6). As he worked on her head, he pivoted the blade to form her profile, weak chin, and neck. Once the white paint had dried, de Kooning next applied a thin wash of pink paint with a brush, giving the woman’s skin its translucent quality. Nor does the figure’s yellow dress reveal the careful buildup of distinct paint layers used for the background: both microscopic examination and a paint cross-section (fig. 7) show how fibers from dense underlying scribbles in charcoal were worked up into the dilute wash of yellow paint when it was applied.

The network of charcoal lines that partially contours the figure’s body and scrawls across the paint surface is of crucial importance both here and in de Kooning’s paintings of this period generally. Aptly described by Sally Yard as “willful pentimenti,” these lines are very different in function from the now largely hidden ink underdrawing that served the artist as a preliminary guide.6 In Queen of Hearts and other paintings of the period, the charcoal lines suggest multiple and alternative positions for the figure’s eyes, legs, shoulders, arms, and breasts.As such, they may seem to imply that de Kooning’s method involved early but still visible revisions, with each body part drawn in charcoal, painted, redrawn, and repainted several times. In fact, though, close examination of both works reveals that all of the visible charcoal lines lie either directly on the surface of the paint or just below translucent upper layers of it. The woman in Queen of Hearts, for example, has a second, fainter pair of eyes above her more apparent almond-shaped ones, apparently an abandoned set partly submerged beneath a layer of paint (fig. 8). Yet both sets of eyes—the upper set drawn in charcoal, the lower in graphite—are inscribed directly into the upper paint layer; the charcoal ones are simply smudged to reduce their prominence. Similarly, the multiple ovals that form the woman’s breasts lie either directly on the paint surface or just below a thin wash of paint. As he worked, de Kooning moved the position of the breasts downward, retaining evidence of the earlier versions. He clearly did not try to hide his charcoal revisions; allowing his alterations to show was an intentional decision invented to retain previous versions of his work.

Analysis of Queen of Hearts reveals the unconventionality of de Kooning’s approach. Elements of academic practice remain in his carefully prepared ground, his transfer of a sketched study to the painting, his use of fine-art paints, and his careful buildup of successive paint layers, but overall the work is remarkable for its breadth of handling. There seems little doubt that de Kooning at this time was making a conscious break with established pictorial convention; the lack of modeling or of spatial recession, and the clearly visible revisions, seem deliberately artless. The combination of highly polished passages with paint applied with a scraper, scumbled brushwork, and the unconventional use of charcoal further undermines the work’s unity. Although Queen of Heartswas clearly the result of an extended process of construction and experiment, it retains a sense of immediacy and even of improvisation that points forward to Woman, 1948.

1 De Kooning’s reliance on certain traditional methods of physically composing a painting in this period extends to his preparation of his supports: to the smooth side of the fiberboard panel on which he painted Queen of Hearts, he applied several layers of a traditional gesso ground of gypsum (CaSO4) mixed with a water-soluble adhesive, probably hide glue. Gypsum was identified by microchemical analysis and inferences from SEM-EDX; the protein-based glue was identified with FTIR spectroscopy by comparing a water extract of the ground binder with one of hide glue. Two cross-sections of the upper right and lower right corners of Queen of Hearts show residues of blue paint below the ground, indicating that de Kooning scraped down an earlier composition before applying the current ground layer.

2 This area of the painting actually includes six layers of paint. The cross-section does not include a strip of masking tape that de Kooning applied to the edge of the panel and that extends a marginal amount onto its face and the pink paint that he applied over the tape. The cross-section was taken from a small area in which the tape is missing.

3 Paint cross-sections are microscopic-size samples removed from existing areas of paint loss or from the painting’s edges, embedded in artificial resin, and ground and polished to expose the sample perpendicular to the paint layers. The cross-section can be studied with an array of microanalytical techniques to determine the stratigraphy, pigments, and binding media.

4 The identification of the oil as linseed oil is based on the relative amounts of saturated palmitic and stearic acids in three samples, in addition to the presence of the unsaturated oleic and azelaic acids. See Susan Lake, Willem de Kooning: The Artist’s Materials, Los Angeles, 2010:72–86.