“Monuments can be used for the living.” – Krzysztof Wodiczko, The New York Times

Wodiczko is celebrated for his large-scale projections that address such themes as war, conflict, surveillance, trauma, and memory. His work is informed by his lived experiences: his history of fleeing Poland during World War II as a child; his earliest memories of returning to the ruins of Warsaw after the conflict; and of being an artist under Soviet-ruled Poland until fleeing to Canada in 1977. By using the façades of buildings and monuments as backdrops for his work, Wodiczko interrogates the construction of collective memory and history while reconsidering the meaning of public space. In a career spanning four decades, he has realized more than 80 of these public projects all around the world. Wodiczko is currently Professor-in-Residence of Art, Design, and the Public Domain at Harvard University.

In the late 1980s, Wodiczko worked with the Hirshhorn to develop a new project for its uniquely curved building. Hirshhorn Museum, Washington, DC, 1988-2000 first debuted in October 1988, and was restaged in 2018 to coincide with the exhibition Brand New: Art and Commodity in the 1980s. The 68-foot projection spans the building’s three-story façade and features symbolic images that speak powerfully to socio-political issues of both the 1980s and the present day. While referring to such widespread debates as political rhetoric, reproductive rights, and the death penalty, it also alludes to the power of mass media to convey ideologies.

Wodiczko also designed Homeless Vehicle, Variant 5 (1988–89), a device for homeless individuals—who were growing in number at the end of the 1980s—that provided some form of autonomy and contained shelter, a sink, and storage. Homeless Vehicle recently went on view in Manifesto: Art x Agency. 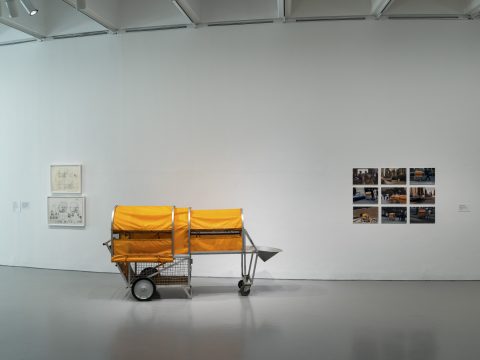 This virtual event is part of #HirshhornInsideOut, the Museum’s initiative to bring art into your home.