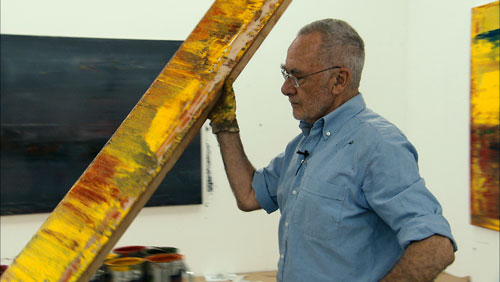 Created while the octogenarian master was preparing works for his 2011–12 retrospective, this documentary interweaves scenes of the artist at work, archival footage, and interviews with gallerist Marian Goodman, scholar Benjamin Buchloh, and Richter’s assistants. Discussing the intense process of filming the painter, Belz says, “I think he was afraid because he’s so self-critical. It’s important to mention that there were no second takes. I never asked him to say or do things twice. But I knew it wasn’t a fly on the wall—it was more of an encounter. And maybe this sometimes made it harder for him to work. But at the same time, I think the challenge of working on camera attracted him to it, creating new rules and new situations and then making it look easy and graceful. Like Nietzsche said, ‘Dancing in chains.’”

In German with English subtitles.