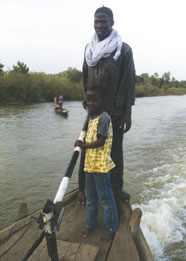 Mali has been in the news as a hotbed of geopolitical strife, but challenges brought on by climate change and drought also loom large. Dwindling fish populations have compromised an age-old source of food and income, so the enterprising boatmen of the Bozo community now fill their pirogues with sand and gravel and pilot them to the capital, Bamako, where they sell the raw materials to the construction industry. This business is not only physically demanding but also lucrative enough to draw stiff competition. Diarra’s documentary studies this market shift and speculates on what it means for the future of the region.

In Bamanankan and French with English subtitles. Presented in conjunction with the Environmental Film Festival in the Nation’s Capital and with collaboration and project support from the Landscape Studies program of Harvard University at Dumbarton Oaks.