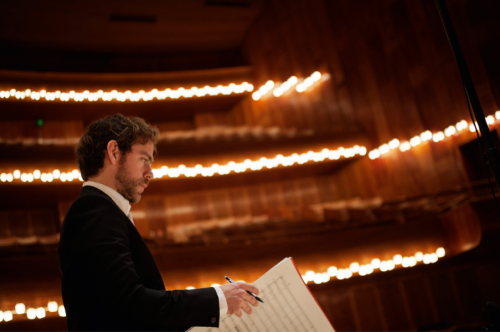 Bryce Dessner, composer and guitarist for the band The National, will join the Hirshhorn for a performance and discussion about his role as performer, collaborator, and artistic innovator.  Dessner was invited with his band The National by Ragnar Kjartansson to play their three-minute song ‘Sorrow’ repeatedly for six hours during a performance at MoMA PS1.  The resulting work, A Lot of Sorrow, lives on through a six-hour video installation that illustrates many of the core themes of Kjartansson’s practice – performance, repetition, endurance.  Dessner, who will be featured for the Kennedy Center’s ’Declassified’ series, Bryce Dessner will preview a selection of his music with an ensemble from the National Symphony Orchestra before sitting in conversation with Hirshhorn curator Stéphane Aquin and the Kennedy Center’s Director of Artistic Planning, Nigel Boon.

This program is presented in collaboration with The Kennedy Center.