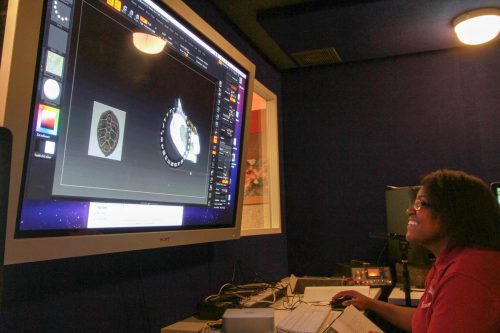 Participant in Hirshhorn’s After-School Program Explores 3-D Design
Sixteen-year-old Akilah Padgett, a participant in the ARTLAB+ after-school program at the Smithsonian’s Hirshhorn Museum and Sculpture Garden, will participate in the first White House Maker Faire, hosted June 18 by President Barack Obama. “Akilah exemplifies the spirit of ARTLAB+,” said Ryan Hill, the Hirshhorn’s director of digital learning programs, who will accompany her to the invitation-only event. “She decided what she wanted to explore and with the guidance of our artist-mentors, made her own way.”

The Maker Faire celebrates the initiative of do-it-yourself-ers who are getting a head start on pursuing education and employment in STEM (science, technology, engineering and math) fields. “In recent years, a growing number of Americans have gained access to technologies like 3-D printers, laser cutters, easy-to-use design software and desktop machine tools, democratizing the act of making and enabling citizens to build just about anything,” said a White House statement. The White House has designated June 18 a Day of Making and will publicize the event on social media with the #NationOfMakers hashtag. The splash page for the event is www.whitehouse.gov/MakerFaire.

An ARTLAB+ participant for roughly a year and a half, Padgett started showing an interest in 3-D technology about six months ago. She explored design software such as Maya, ZBrush and Tinkercad and has fabricated a nine-foot-tall Tyrannosaurus rex model from paper. She has also authored a 3-D Papercraft Certification that will become part of the ARTLAB+ curriculum.

Most recently Padgett has been working on an original papercraft design for the head of an Edmontonia longiceps dinosaur. She developed and colored the model using Maya and ZBrush, transformed the 3-D model into 2-D polygons using Pepakura Designer software then printed the model using the large-scale printer in the Hirshhorn’s ArtLab space. To create the finished model, she spent many hours cutting, folding and assembling the printed shapes into three-dimensional form.

About the ArtLab and ARTLAB+ Programs
The ArtLab is the studio space, located on Jefferson Drive in the Hirshhorn’s Sculpture Garden, where ARTLAB+, the Hirshhorn’s signature drop-in, after-school youth program, happens. Through workshops, clubs and special events, ARTLAB+ gives Washington-area teens the space, resources and technology they need to explore their creativity while developing important visual- and digital-literacy skills. Teens from across the region take on unique roles in a design-studio environment, often using the museum’s modern and contemporary art collection, as well as other Smithsonian collections, to inspire their own creative projects. Guest artists and mentors offer support and guidance throughout the creative process, nurturing the next generation of artists and innovators.

ARTLAB+ programming is supported by funds from the Smithsonian Institution Youth Access Grants program, the Keith Haring Foundation, the Estate of Frank B. Gettings in memory of Nancy Kirkpatrick and Frank Gettings, and the Goldberg Family Fund. The ArtLab was made possible by early support from the John D. and Catherine T. MacArthur Foundation, the Pearson Foundation and the Knight Foundation. Additional funding is provided by Vivian and Elliott I. Pollock.

About the Hirshhorn
The Hirshhorn Museum and Sculpture Garden, the Smithsonian’s museum of international modern and contemporary art, has nearly 12,000 paintings, sculptures, photographs, mixed-media installations, works on paper and new media works in its collection. The Hirshhorn presents diverse exhibitions and offers an array of public programs that explore modern and contemporary art. Located at Independence Avenue and Seventh Street S.W., the museum is open daily from 10 a.m. to 5:30 p.m. (closed Dec. 25). Admission to the galleries and special programs is free. For more information about exhibitions and events, visit hirshhorn.si.edu. Follow the Hirshhorn on Facebook at facebook.com/hirshhorn, on Twitter at twitter.com/hirshhorn and on Tumblr at hirshhorn.tumblr.com. Or sign up for the museum’s eBlasts at hirshhorn.si.edu/collection/social-media. To request accessibility services, contact Kristy Maruca at marucak@si.edu or (202) 633-2796, preferably two weeks in advance.