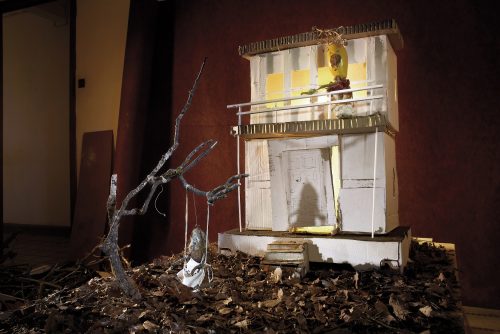 Artist and filmmaker Sergio Caballero (Spanish, b. 1966, Barcelona; lives and works in Barcelona) makes his international museum debut at the Smithsonian’s Hirshhorn Museum and Sculpture Garden. The exhibition “Black Box: Sergio Caballero,” which runs through Jan. 3, 2016, consists of a single 25-minute film, “Ancha es Castilla” or “N’importe quoi” (2014). (These titles loosely translate to “Anything Goes” and “Whatever,” among other renderings, but the artist prefers not to provide translations.)

Caballero engages with the tradition of the grotesque, taking inspiration from the “black paintings” made by Goya in the early 19th century and adapting it to current-day models. The filmmaker’s many pop-cultural touchstones include the 1973 horror film The Exorcist, the Sex Pistols’ 1977 punk anthem “God Save the Queen” and any number of low-budget monster thrillers.

Caballero is also a composer and a founder and co-organizer of Sónar, Barcelona’s International Festival of Advanced Music and New Media Art. His earliest activities include working with the graffiti collective Los Rinos and the electronic music band Jumo during the late 1980s and early 1990s. His surreal feature films, La Distancia (2014) and Finisterrae (2010), have cult followings on the festival circuit.

For more information about the artist and the exhibition, visit hirshhorn.si.edu/collection/sergio-caballero.

Now celebrating its 40th anniversary, the Hirshhorn Museum and Sculpture Garden is the Smithsonian Institution’s museum of international modern and contemporary art. With nearly 12,000 paintings, sculptures, photographs, mixed-media installations, works on paper and new media works, its holdings encompass one of the leading collections of postwar American and European art. The Hirshhorn presents diverse exhibitions and offers an array of public programs that explore modern and contemporary art. Located at Independence Avenue and Seventh Street S.W., the museum is open daily from 10 a.m. to 5:30 p.m. (closed Dec. 25). Admission to the galleries and special programs is free. For more information about exhibitions and events, visit hirshhorn.si.edu. Follow the Hirshhorn on Facebook at facebook.com/hirshhorn, on Twitter at twitter.com/hirshhorn, on Tumblr at hirshhorn.tumblr.com and on Instagram at instagram.com/hirshhorn. Or sign up for the museum’s eBlasts at hirshhorn.si.edu/collection/social-media. To request accessibility services, contact Kristy Maruca at marucak@si.edu or (202) 633-2796, preferably two weeks in advance.