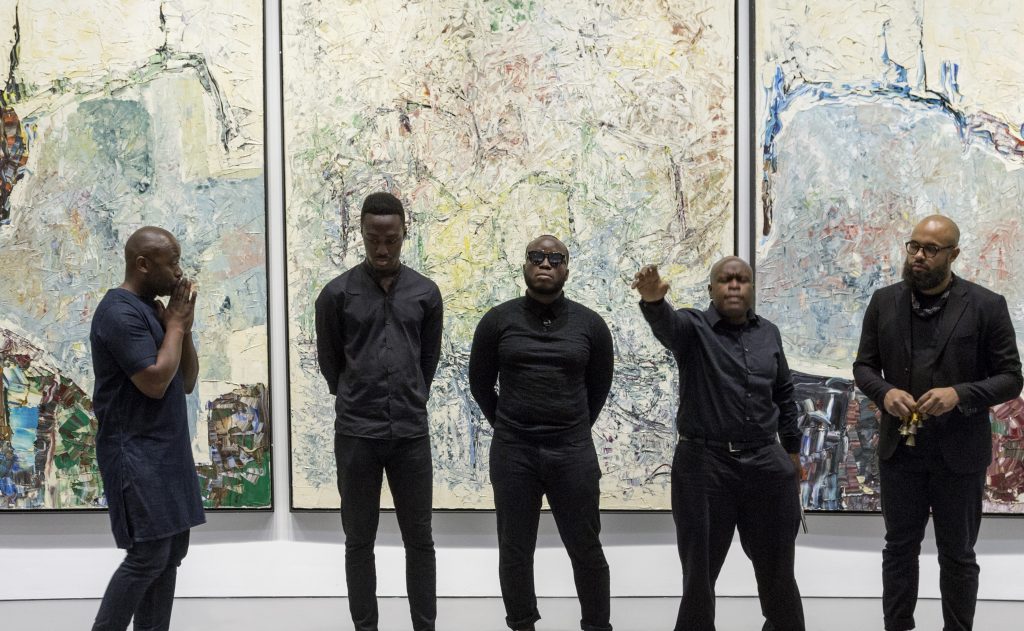 Inspired by the harmonies and expansive artistry of Meshell Ndegeocello’s influential 2014 album Comet, Come to Me, Gates invites Chicago-based interdisciplinary artist Mikel Avery, soprano Ellaina Lewis, and DC-based musician Samuel Prather, to create an evening of musical expression that defies categorization. Working on stage at the Hirshhorn, the artists will respond through music and movement to the legacy of what Gates refers to as “negrobilia”—vintage cultural objects that depict stereotypical and caricatured images of people of color, created over a hundred years of U.S. history.

The inaugural Processions performance in fall 2016, entitled The Runners, featured student-athletes from Howard University in Washington, D.C., alongside the experimental musical ensemble The Black Monks of Mississippi, responding with voice, instrument and gesture to artworks on view in the Hirshhorn’s third-floor galleries.

Subsequent performances will continue to tap into the Washington region’s rich heritage of jazz, folk and gospel musicians, as well as dancers, artists and students. A third performance is planned for spring 2018.

Processions has been made possible with support from the Sidney E. Frank Foundation. Additional support has been provided by The Skanby + Gould Foundation.

Theaster Gates’ practice includes sculpture, installation, performance and urban interventions that aim to bridge the gap between art and life. Gates works as an artist, curator, urbanist and facilitator and his projects attempt to instigate the creation of cultural communities by acting as catalysts for social engagement that leads to political and spatial change.

Gates has exhibited and performed at the National Gallery of Art (Washington D.C.), Studio Museum in Harlem (New York), Whitechapel Gallery (London), Art Gallery of Ontario (Canada), Punta della Dogana (Venice) and Documenta 13 (Kassel, Germany), Kunsthaus Bregenz (Austria) and Fondazione Prada (Milan). He has received awards from Artes Mundi 6, Creative Time, the Vera List Center for Art and Politics, United States Artists and, most recently, the Nasher Sculpture Prize 2018. Gates most ambitious project to date is the ongoing real estate development, known as “Dorchester Projects”. In 2006, Gates purchased an abandoned building on 69th and Dorchester Avenue on Chicago’s South Side, collaborating with architects and designers to gut and refurbish the buildings using found materials. Gates is the founder and executive director of the non-profit Rebuild Foundation, which now oversees a network of buildings across the South Side including Dorchester Projects and the Stony Island Arts Bank, as well as a Professor in the Department of Visual Art and Director of Arts and Public Life at the University of Chicago.