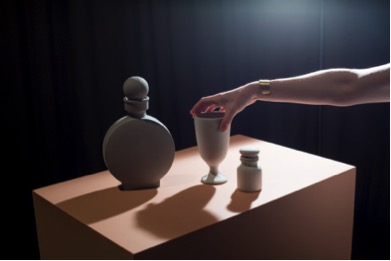 Based on Shana Lutker’s third chapter of her forthcoming book, Le “New” Monocle: The History of the Fistfights of the Surrealists, this multi-media performance tells the story of a fight that broke out 90 years ago, on May 29, 1925, during a lecture about literature. Falling somewhere between a play and a lecture, the story follows the artist’s attempts to decode the motives of the Surrealists who disrupted the event and follows its ripples through history. Weaving together Surrealist artworks and writings related to the fistfight’s instigators and witnesses, Lutker’s play will incorporate scenes from Louis Aragon’s Au Pied du Mur (Backs to the Wall), excerpts from Germaine Dulac’s film La Coquille et le Clergyman (The Seashell and the Clergyman), and the music of Arthur Honegger performed live on piano.​ This performance has a total running time of 40 minutes.