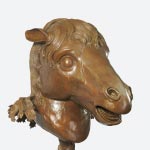 The horse appears for the first time in the Yellow River valley during the Bronze Age alongside the chariot, having been introduced probably through contacts with inner Asian nomad pastoralists. As witnessed by the numerous life-size statues of horses in the terracotta army of the first emperor of China, among other evidence, horses played a paramount role in China’s history. Notwithstanding their strategic importance, good horses often had to be imported from Central Asia at great cost because of local breeding difficulties. For these reasons, the horse was seen as a valuable and, to a certain extent, exotic animal. Tang dynasty writers often marveled at the fabled heavenly horses of Ferghana, hardy and fast animals thought to sweat blood. The famous ceramic Tang horse figurines, which are much appreciated by collectors, represent this breed. Horses also were commonly portrayed in paintings. —Paola Demattè in Ai Weiwei: Circle of Animals, ed. Susan Delson