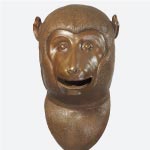 The monkey is a complex figure in Chinese animal symbolism. Praised for its ability to drive evil away by controlling spirits and demons, it is also thought to be a trickster and a clown. Some consider it to be an emblem of deceitfulness and ugliness, while others, Buddhists and Taoists in particular, regard it as a clever animal very close to humans and a sign of humanity’s link to nature. In Daoism, the gibbon’s long arms were thought to be conducive to absorbing the universal qi. In Chan (Zen) Buddhism, the monkey is the mark of the as-yet-unenlightened mind.  A well-known monkey figure is Sun Wukong, also known as Monkey King, the main character in the sixteenth-century Chinese classical novel Journey to the West, which tells in fantastic terms the story of the Buddhist monk Xuanzang’s pilgrimage to India. —Paola Demattè in Ai Weiwei: Circle of Animals, ed. Susan Delson