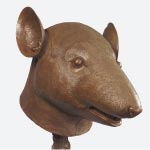 According to a Chinese fable, the rat came to be first in the twelve-animal cycle because, in a race set up by the Buddha to determine the order of the twelve animals, the rat surreptitiously rode on the ox’s back, dismounting just before the finish line to rush ahead and win the race. This story highlights the qualities of the rat, an animal generally believed to be shy and mean, but which in China is also a symbol of intelligence, innovation, industry, and wealth. The good qualities that Chinese tradition attributes to the rat (or mouse) stem from these animals’ uncanny ability to find and hoard food—qualities that also can be seen in a negative light, and so the rat sometimes appears in Chinese fables and paintings as the emblem of corrupt officials or profiteers. —Paola Demattè in Ai Weiwei: Circle of Animals, ed. Susan Delson