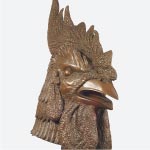 The rooster is a revered animal in Chinese lore because it is thought to be able to ward off evil influences (probably because it eats poisonous pests). It is also said that a picture of a red rooster attached to a wall can protect a house from fire. The rooster is in fact the principal embodiment of yang, the male and active force, and the force of fire. The association with yang, fire, and ultimately the sun, link the rooster to the Vermilion Bird (zhu que 朱雀), which is the symbol of the south and a constellation. The connection with the cosmic sphere extends to the chicken’s eggs, which are emblems of the universe. The body and qualities of the rooster are emblems of the five virtues: the rooster’s crown, which resembles the cap of Confucian officials, symbolizes its scholarly and literary ambitions; the spurs indicate its military prowess; its propensity to fight is a sign of courage; its ability to rule the henhouse is mark of benevolence; and its early morning crowing is a sign of reliability and faithfulness. Painting of roosters are auspicious, and painting of roosters, hens, and chicks are symbols of caring parents. —Paola Demattè in Ai Weiwei: Circle of Animals, ed. Susan Delson