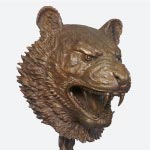 The tiger appears often in Chinese literature and art and is considered the king (wang) of animals. In a Neolithic tomb in central China, a tiger and dragon mosaic was found arranged around the body of the deceased. This is one of the earliest representations to the mythical white tiger (baihu), the emblem of the west and a symbol of the constellation by that name that occupies the western quadrant of the sky (as a pendant to the green dragon of the east). In one story, the immortal Xiwangmu (Queen Mother of the West), who presides over the orchard of longevity peaches, is shown either sporting a tiger tail or accompanied by a tiger. Tigers are also represented in schematic designs on Bronze Age ritual vessels and are frequently seen in Taoist paintings, either alone or accompanying immortals and sages. —Paola Demattè in Ai Weiwei: Circle of Animals, ed. Susan Delson