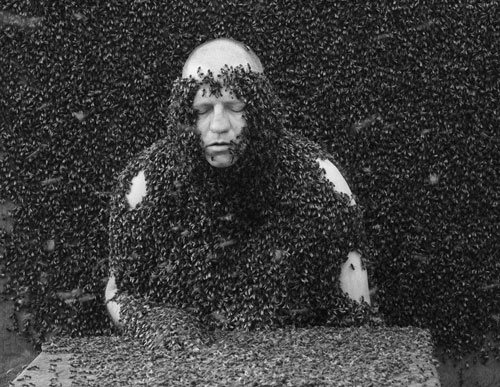 Still from Jeroen Eisinga’s Springtime, 2011. Courtesy of the artist.

Artist Is Swarmed by 250,000 Bees in Silent Video
Known for his short films, video installations and photographs, Jeroen Eisinga (Dutch, b. Delft, 1966; lives and works in The Hague) combines the conventions of centuries-old portraiture and cutting-edge performance art in the harrowing video “Springtime” (2009­–2011). The single-channel, silent, black-and-white work is open in the Black Box space in the Smithsonian’s Hirshhorn Museum.

Shot on 35 mm film and digitally reformatted, “Springtime” is a fixed view of the artist as he is slowly enveloped by a quarter of a million bees. This dangerous performance is initially hard to watch, particularly as the insects alight on Eisinga’s face and gather around his eyes. Over the course of nearly 20 minutes, the artist’s icon-like gaze is obscured and his form is cloaked in a living shroud. The table before him and the wall behind him also become covered by this swarm.

Eisinga’s action is opposite in intention to sensationalistic “bee bearding,” a competitive stunt popular at carnival sideshows and agricultural expositions. “What is riveting is the shift viewers experience from horror to empathy to identification,” said Hirshhorn associate curator Kelly Gordon. “Eisinga’s imagery draws on the legacy of saints and martyrs who were driven to extreme acts to prove their faith through endurance. In Gothic and Northern Renaissance painting, many are depicted as exemplars, demonstrating their devotion through self-sacrifice.”

The artist directed the work, but not from behind the camera, as it was important to him to undertake the performance himself. Planning and preparation took two years, including coaching from bee handlers. In addition to raising support to complete the project and mastering its technical dimensions, Eisinga had to cultivate the mental and physical discipline required for maintaining one’s composure when engulfed by the potentially threatening insects. He had neither resources nor opportunity to do run-throughs, double back or stage retakes. “Springtime” documents a singular, haunting performance.

Related Programs
The Hirshhorn offers a range of interactive educational experiences designed to engage people of all interest levels in contemporary art. On Wednesday, Oct. 10, at 7 p.m., Eisinga will discuss his work as part of the museum’s Meet the Artist series; consult hirshhorn.si.edu for the latest information. The museum’s library of podcasts makes gallery walk-throughs and interviews with artists accessible internationally.

About the Hirshhorn
The Hirshhorn Museum and Sculpture Garden, the Smithsonian Institution’s museum of international modern and contemporary art, has nearly 12,000 paintings, sculptures, photographs, mixed-media installations, works on paper and new media works in its collection. The Hirshhorn presents varied exhibitions and offers an array of public programs that explore modern and contemporary art. Located at Independence Avenue and Seventh Street S.W., the museum is open daily from 10 a.m. to 5:30 p.m. (except Dec. 25). Admission to the galleries and special programs is free. For more information about exhibitions and events, please visit hirshhorn.si.edu. Follow the Hirshhorn on Facebook at facebook.com/hirshhorn and on Twitter at twitter.com/hirshhorn. To request accessibility services, please contact Kristy Maruca at marucak@si.edu or (202) 633-2796, preferably two weeks in advance.