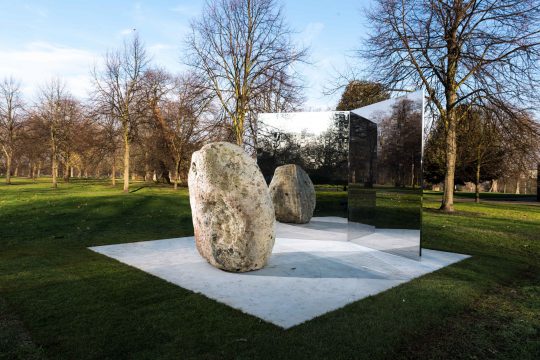 The Hirshhorn has commissioned an ambitious site-specific installation by the celebrated Korean artist Lee Ufan. The expansive installation will feature approximately 10 new sculptures from the artist’s signature and continuing “Relatum” series and marks the artist’s largest site-specific outdoor sculpture project in the U.S. It is the first exhibition of Lee’s work in the nation’s capital, and the first time in the museum’s 44-year history that its 4.3-acre outdoor plaza will be devoted entirely to the work of a single artist.

Each of the sculptures will be created in response to the museum’s unique architecture, and will continue Lee’s iconic practice of placing contrasting materials, such as stainless steel plates and boulders, in dialogue with one another to heighten awareness of the world, in Lee’s words, “exactly as it is.” Leaving the materials relatively unaltered, Lee arranges them with careful attention to the subtle nuances of the site in order to foreground the visitor’s encounter with the art as it unfolds in time and space. 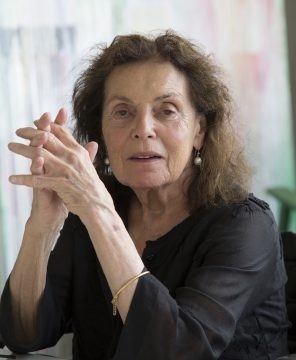 The Hirshhorn will host the largest site-specific exhibition to date by the acclaimed abstract painter Pat Steir. The exhibition is an expansive new suite of the artist’s signature “Waterfall” paintings, spanning the entire perimeter of the museum’s second-floor inner-circle galleries, extending nearly 400 linear feet. Marking Steir’s first solo exhibition in Washington in nearly five decades, these immersive works will transform the museum into a vibrant spectrum of color. The 28 large-scale paintings, when presented together as a group, will create an immense color wheel that shifts hues with each painting, with the pours on each canvas often appearing in the complementary hue of the monochrome background.

“Manifesto: Art x Agency” is a group exhibition that examines the art historical impact of artist manifestos from the 20th century to present day. The exhibition will include Julian Rosefeldt’s “Manifesto,” presented as a multichannel film installation for the first time in Washington, D.C., alongside a diverse selection of works from the museum’s permanent collection. Comprising more than 100 works of art and ephemera created over a hundred-year period, “Manifesto: Art x Agency” explores how artists used manifestos to engage with the political and social issues of their time and how contemporary practices still employ art as a tool in the making of history. 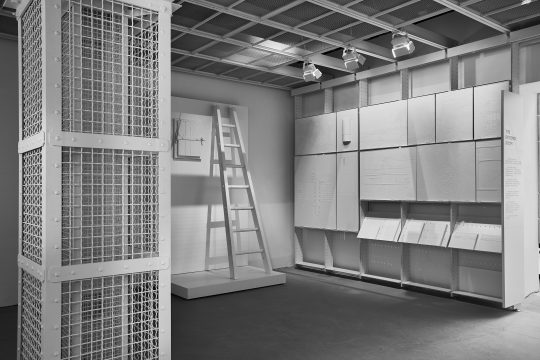 Interior perspective of “The Evidence Room.” Photo by Fred Hunsberger, University of Waterloo School of Architecture.

The Evidence Room is an installation that gives visual testament to the atrocities of the Holocaust, drawing on architectural forensic evidence to focus attention on the architecture that made the Auschwitz concentration camp a systematic factory for mass murder. Piecing together information gleaned from blueprints, correspondence and photographs that substantiate eyewitness accounts, the project explores the role of architecture in history, addressing themes around ethics and truth. The Hirshhorn’s presentation of The Evidence Room will mark the installation’s U.S. premiere.

The Evidence Room features three architectural reconstructions, 65 plaster casts that give sculptural form to evidence presented by architectural historian Robert Jan van Pelt in a landmark libel case in London in 2000. Thwarting Nazi attempts to destroy the proof of their crimes and post-war Holocaust denial, the evidence gathered traces the work done by German architects between 1941 and 1943 and points what van Pelt has referred to as the greatest crime ever committed by architects.

RYAN ALEXIEV, JIM RICKS AND HANK WILLIS THOMAS, IN SEARCH OF THE TRUTH (THE TRUTH BOOTH)
JUNE 8–23, 2019
Organized by the Hirshhorn
(Plaza) 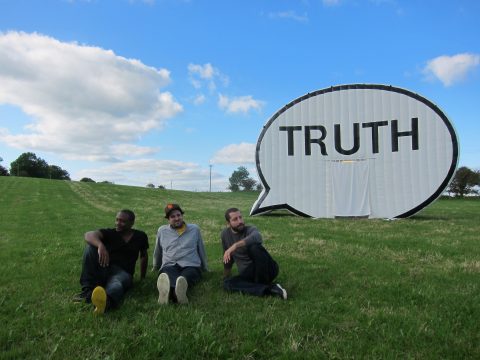 In Search of the Truth (The Truth Booth) by Ryan Alexiev, Hank Willis Thomas, Jim Ricks, Jorge Sanchez, and Will Sylvester. Courtesy Cause Collective.

The Hirshhorn will present the Washington, D.C., debut of “In Search of the Truth (The Truth Booth),” a long-term global project by CAUSE COLLECTIVE artists Ryan Alexiev, Jim Ricks, Hank Willis Thomas, Jorge Sanchez and Will Sylvester. Situated on the museum’s outdoor plaza overlooking the National Mall, the participatory installation will be open daily, weather permitting. “The Truth Booth” will be presented in conjunction with “Manifesto: Art x Agency,” the Hirshhorn’s exhibition exploring the art historical impact of artist manifestos from the 20th century to present day.

The installation is composed of a 16-foot-tall tent shaped like a speech bubble where visitors are invited to enter and leave a video message in response to the statement, “The truth is…” The recorded confessional-style videos are edited into two-minute-long clips and added to the project’s website, insearchofthetruth.net, which serves as a public archive of these video artworks. With the word “TRUTH” prominently printed on its side, “The Truth Booth” will serve as a visible, thought-provoking beacon on the National Mall, while simultaneously providing a meditative, intimate space where people can sincerely share their thoughts. 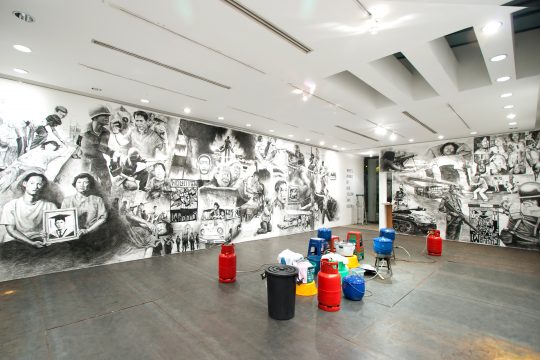 Using food as his main medium, Thai artist Rirkrit Tiravanija creates art from real-time experiences and exchanges, upending the traditional relationship between object and spectator. The Hirshhorn will present its first-ever exhibition of works by the conceptual artist, titled “Rirkrit Tiravanija: Who’s Afraid of Red, Yellow, and Green,” which will transform the museum’s galleries into a communal dining space in which visitors will be served curry and invited to share the meal together. By framing this everyday activity as art, Tiravanija calls attention to the beauty in a shared meal, addressing themes around memory, culture, and community.

The exhibition will also feature a large-scale wall mural, drawn live by a team of local art students, using historical imagery referencing protests against Thai government policies. A series of documentary shorts will also be included, curated exclusively for the Hirshhorn by Thailand’s leading independent filmmaker Apichatpong Weerasethakul in collaboration with the artist. 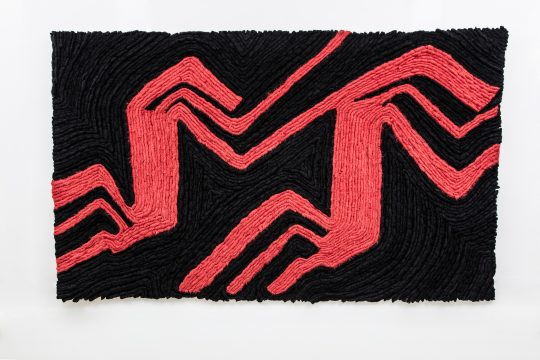 Featuring 20 years of artistic output, “Enrico David: Gradations of Slow Release” is the largest U.S. museum survey of the artist’s works to date. This exhibition shows the breadth and versatility of a distinguished artist, whose practice is characterized by transformation. One of the most original artists working today, David employs a variety of media to develop a dynamic and unique vision of the human form and the ever-shifting sense of being that rests therein. Often fragile, vulnerable, grotesque, and mutable, David’s imagery achieves a universal expression of the human experience, albeit through a deeply personal formulation.

“Pickett’s Charge” is Bradford’s first solo exhibition in Washington, and his first major American solo show following his presentation as the U.S. representative for the 57th Venice Biennale.

WHAT ABSENCE IS MADE OF
OCTOBER 18, 2017–SEPTEMBER 2019
Curated by Gianni Jetzer
Organized by the Hirshhorn
(Third Level) 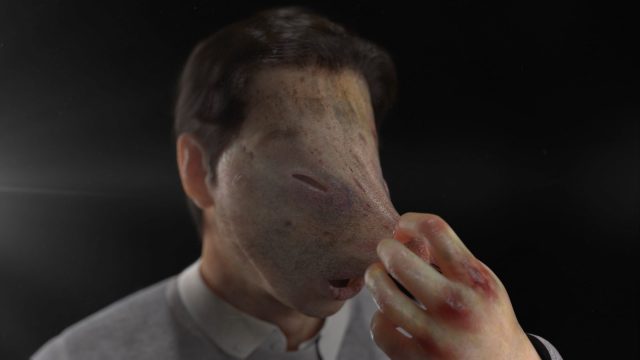 “What Absence Is Made Of” presents artworks from the last 65 years that investigate the space between the tangible and the intangible. Selected from the Hirshhorn’s permanent collection, the exhibition highlights new acquisitions by Annette Lemieux, Ed Atkins, and Huang Yong Ping, as well as collection favorites by Ana Mendieta, John Baldessari, Fred Sandback, and Ann Hamilton. The artists featured utilize absence as a powerful component in their work, employing such methods as reduction, erasure, negative space, and monochrome. Focusing on prominent themes in art since the 1960s, the exhibition charts the rising appeal of immateriality in reaction to an increasingly material world. 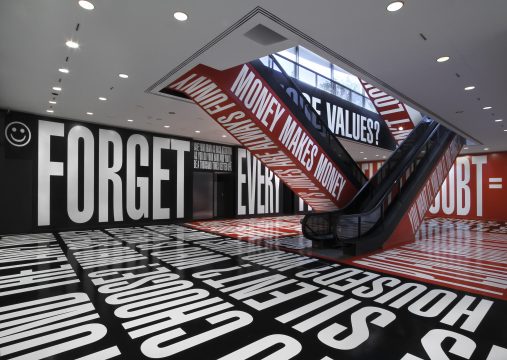 Part of an initiative to bring art to new sites within and around the building, this installation by Barbara Kruger fills the Lower Level lobby and extends into the newly relocated museum bookstore. Famous for her incisive photomontages, Kruger has focused increasingly over the past two decades on creating environments that surround the viewer with language. The entire space—walls, floor, escalator sides—is wrapped in text-printed vinyl, immersing visitors in a spectacular hall of voices, where words either crafted by the artist or borrowed from the popular lexicon address conflicting perceptions of democracy, power, and belief.

At a moment when ideological certitude and purity seem especially valued, Kruger says she’s “interested in introducing doubt.” Large areas of the installation are devoted to open-ended questions, while the section occupying the bookstore explores themes of desire and consumption.