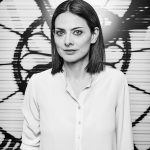 Bettina Pousttchi (German, b. Mainz, 1971) has often contemplated systems of time and space in her art. Between 2008 and 2016, she traveled around the globe to make World Time Clock, a series of 24 photographs taken in 24 different time zones. In each location, the artist captured a picture of a public clock at the same local moment: five minutes before two in the afternoon. Representing places as far-flung as Mexico City, Bangkok, and Tashkent, the images together suggest what the artist calls an “imaginary global synchronism.” The series also charts the reach of colonial power, showing, for example, how imitations of London’s iconic Big Ben denote the public time in faraway places such as Mumbai, Sydney, and Cape Town.

The Hirshhorn was a resonant setting for an artwork concerned with the global structuring of time. It was in Washington, DC, in 1884, that an international conference agreed on a single prime meridian, resulting in the system of time zones that Pousttchi navigated to create World Time Clock. Her photographs were also set against the circular form of the building itself, on which could be mapped both the face of a clock and the daily passage of the sun. The progressive shift in light and shadow over the course of the day asserted the turning of the planet and astronomical time, a telling contrast to the politically regulated version suggested by World Time Clock. Curated by Melissa Ho.