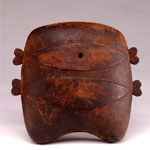 JUN 16, 2014–APR 24, 2016
Drawn from the Hirshhorn’s expansive collection, Speculative Forms reconsidered the historical development of sculpture since the early 20th century and its critique of the autonomy of the object. Including more than 50 works, this two-floor exhibition collapsed conventional art-historical divisions such as figurative versus abstract; still versus kinetic; representational versus simplified geometric; and planar (having a modeled or carved surface) versus stereometric (exposing the internal structure). The objects oscillate between these dichotomies, thus turning one’s preconceived notions of sculpture inside out.

Inspired by the philosophical notion of Speculative Realism, which emphasizes an equal relationship among subject, object, and space, the exhibition highlighted the importance of installation and the viewer’s eye and body in relation to the object. The selected works—ranging from the well known to the rarely exhibited—challenge the modernist notion that sculptures exist isolated from their surroundings. The exhibition followed these threads through Surrealism, Constructivism, Assemblage, Op and Kinetic Art, Minimalism, and Post-Minimalism. The materiality and physicality of the sculptures on the one hand, and their more intangible, phenomenological aspects on the other, raised intriguing questions about the potential and limits of the perception of objects and the larger world.