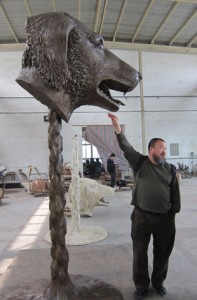 April 19, 2012 to March 17, 2013
This April, the Hirshhorn will install noted Chinese artist Ai Weiwei’s monumental outdoor work Circle of Animals/Zodiac Heads, which has recently been drawing crowds in cities around the world from New York and Los Angeles to London and Taipei. The twelve bronze animal heads representing the signs of the Chinese zodiac, each of which stand approximately ten feet high, will be displayed around the perimeter of the fountain in the Museum’s central plaza. These sculptures are re-envisioned and enlarged versions of the original eighteenth-century heads that were designed during the Qing dynasty for the fountain-clock of the Yuanming Yuan [Garden of Perfect Brightness], an imperial retreat outside Beijing, and which were pillaged in 1860 by invading Europeans.

Ai Weiwei: Circle of Animals/Zodiac Heads is organized by the Hirshhorn Museum and Sculpture Garden and AW Asia. Crozier Fine Arts is the official logistical partner for this exhibition.