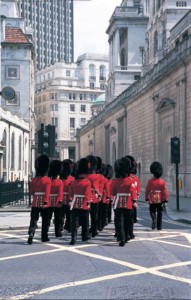 April 17 to August 13, 2006
The Black Box space for new media featured work by Francis Alÿs (b. Antwerp, Belgium, 1959). The artist, who has lived and worked in Mexico City since 1990, considers urban settings his “open-air studio.” Guards (2004-2005) uses various camera angles to follow 64 Coldstream Guards as they assemble and march through downtown London. Just outside the Black Box is Shoeshine (2005), which documents preparations for the regimental maneuver staged in Guards. The videos are from Seven Walks, a series commissioned by Artangel.

Support for the Black Box program is provided in part by Lawrence A. Cohen/Ringler Associates.