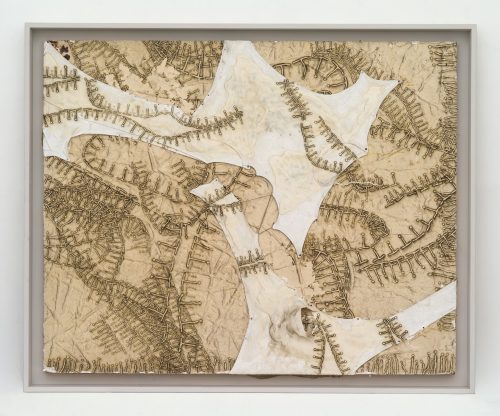 The Smithsonian’s Hirshhorn Museum and Sculpture Garden has acquired new works by a dozen artists or artist groups from Iran, Japan, Mexico, Poland, Belgium, the Netherlands, Germany, the United Kingdom and the United States.

“The Hirshhorn is acquiring works that enable broader, deeper narratives of the history of modern and contemporary art,” said Melissa Chiu, the Hirshhorn’s director. “We’re adding another dimension to a story that was previously the domain of European and American artists. These acquisitions speak to the Hirshhorn’s increased international focus. At the same time, our collection gains depth in underexplored areas of American art over the past few decades, particularly the work of African American artists.”

Monir Shahroudy Farmanfarmaian’s “Untitled,” (1975–76), a geometric mosaic that juxtaposes mirrors, reverse-painted glass and plaster, relates to optical and minimalist works in the collection, as well as to works by women in the 1960s and 1970s. “Rhyme-S'” (1960) by Natsuyuki Nakanishi joins other paintings that push the boundaries of abstraction and augments the museum’s holdings of postwar Asian art.

Two works highlight developments by African American artists in the 1970s. Senga Nengudi’s “R.S.V.P. X” (1977/2014), a sculpture made of worn nylon stockings that are stretched, knotted and weighed down with sand, has ties to performance, feminist art and post-minimalism. Two triptychs by Charles Gaines, “Walnut Tree Orchard: Set 13” (1975–2014) and “Walnut Tree Orchard: Set 14” (1975–2014) join other conceptual works that employ photography and numerical systems.

The Hirshhorn’s holdings of postwar assemblage are complemented by Michael Todd’s “Cluster” (1963–64), made of found objects and inspired by African and surrealist sculpture. The Art Workers’ Coalition’s antiwar “Q. And babies? A. And babies.” (1970) relates to activist art and art that employs the medium of the commercial poster.

Underscoring the Hirshhorn’s commitment to sound art and complementing other collection works that address historical themes, Susan Philipsz’s multimedia installation “Part File Score” (2014) is based on the work of Hanns Eisler, a composer blacklisted in the U.S. whose music had previously been banned in Nazi Germany.

Three works by emerging international artists increase the Hirshhorn’s substantial holdings of media art. One of the highlights of this year’s Venice Biennale has been C.T. Jasper and Joanna Malinowska’s “Halka/Haiti 18°48’05″N 72°23’01″W” (2015). Seen in the Polish pavilion, it is a video installation documenting a Polish-Haitian performance of Stanisław Moniuszko’s mid-19th century opera “Halka” in Cazale, Haiti. Héctor Zamora’s “O Abuso da História [The Abuse of History]” (2014) is a video of a group performance at São Paulo’s Hospital Matarazzo, a historic building slated for redevelopment. Seen in a 2013 Black Box exhibition, Gerco de Ruijter’s stop-frame animation “CROPS” (2012) uses imagery mined from Google Earth to extend the Dutch landscape tradition.

About the Hirshhorn
Now celebrating its 40th anniversary, the Hirshhorn Museum and Sculpture Garden is the Smithsonian Institution’s museum of international modern and contemporary art. With nearly 12,000 paintings, sculptures, photographs, mixed-media installations, works on paper and new media works, its holdings encompass one of the leading collections of postwar American and European art. The Hirshhorn presents diverse exhibitions and offers an array of public programs that explore modern and contemporary art. Located at Independence Avenue and Seventh Street S.W., the museum is open daily from 10 a.m. to 5:30 p.m. (closed Dec. 25). Admission to the galleries and special programs is free. For more information about exhibitions and events, visit hirshhorn.si.edu. Follow the Hirshhorn on Facebook at facebook.com/hirshhorn, on Twitter at twitter.com/hirshhorn, on Tumblr at hirshhorn.tumblr.com and on Instagram at instagram.com/hirshhorn. Or sign up for the museum’s eBlasts at hirshhorn.si.edu/collection/social-media. To request accessibility services, contact Kristy Maruca at marucak@si.edu or (202) 633-2796, preferably two weeks in advance.