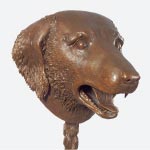 When a wandering dog chooses to settle down in a home, it is thought that that family will prosper. The dog also is considered a symbol of loyalty. Possibly for this reason, dogs were buried in Bronze Age tombs as sacrifices at the bottom of the pits, below the coffin. A Chinese legend holds that in the sky there is a Heavenly Dog (Tiangou), which is the spirit of a woman who died unmarried and without children. The Heavenly Dog is said to steal the souls of infants in order to adopt them or, according to other accounts, to have a chance to return to earth. For this reason, newly married women keep the image of a spirit in the act of shooting an arrow to the Heavenly Dog in their room. The Heavenly Dog, which is actually a star (Tiangou xing), was also supposed to devour the moon and cause eclipses. Dogs appear in various guises in Chinese art. Ceramic or porcelain figures were formerly buried in tombs as protectors. Statues of liondogs often guard the entrances of temples or important buildings. Paintings may represent favorite pets or the imperial hunting dogs. —Paola Demattè in Ai Weiwei: Circle of Animals, ed. Susan Delson