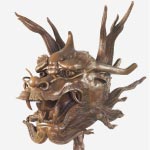 The dragon, the most auspicious of the twelve animals, was a symbol of the emperor’s power in dynastic China. Its origins are very ancient and its image was prominent on imperial robes and porcelain. Archaeologists have traced the earliest images of the dragon to the prehistoric period, when they were painted on pottery or fashioned into jade pendants. The dragon, the only imaginary creature among the twelve, is said to be a composite with the horns of a deer, a camel’s head, the eyes of a demon, the body of a snake, and the scales of the carp. The dragon has 117 scales, 81 of them yang and 36 yin. The dragon is also linked with astronomy because the green dragon (qinglong) constellation is a symbol of the east and thus of the rising sun. A dragonlike creature with one horn, known as the qilin, announced the birth of Confucius by carrying a jade tablet with a message to the mother of the philosopher. In modern China, this creature is still perceived as fortunate, and the year of the dragon often causes an upsurge in birth rates. —Paola Demattè in Ai Weiwei: Circle of Animals, ed. Susan Delson