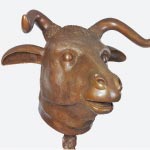 The ox (or water buffalo, which is common in China’s southern regions) played a key role in agriculture and by extension in agricultural rituals and religion in China. Its association with the plowing of fields in springtime made the ox a symbol of spring and the earth. Archaeological evidence shows that since antiquity this animal was employed in ritual sacrifices to natural deities or royal ancestors and that its bones (particularly the shoulder bones) were used in divination by fire and as writing surfaces (the so-called oracle bone inscriptions). Aside from being an important agricultural symbol, the ox and ox herding were adopted by Chan (Zen) Buddhists and Taoists alike with reference to the patient training of the mind towards greater awareness and as symbolic of the return to the source. The legendary Taoist philosopher Laozi is often represented riding an ox or a water buffalo, because legend has it that he wrote the Daodejing (Tao Te Ching) on the back of this animal. —Paola Demattè in Ai Weiwei: Circle of Animals, ed. Susan Delson