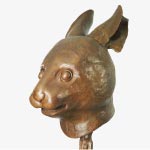 The rabbit or hare has in Chinese lore a close connection with the moon, of which it is thought to be an emanation. According to a famous fairy tale, on the moon there is jade rabbit (yutu), who stands at the foot of a cassia tree pounding a pestle in a mortar to crush the ingredients for the elixir of immortality. A Buddhist story tells that the image of the rabbit was placed on the moon as a reward for this animal having offered his body to feed a hungry beggar who turned out to be a god. In China, the rabbit is also shown preparing his elixir in the company of the Queen Mother of the West, the female immortal. This animal is a symbol of longevity and, for obvious reasons, of fertility. Legend has it that rabbits conceive by looking at the moon and that they live to be one thousand years old. Once they reach five hundred years of age, they turn white and, if seen, they are omens of good things to come. —Paola Demattè in Ai Weiwei: Circle of Animals, ed. Susan Delson