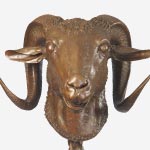 The ram or goat is a domestic and sacrificial animal that appears very early in Chinese history. The character for its name is seen in the earliest Chinese inscription, its likeness is found on Bronze Age ritual vessels, and ancient books mention its use in ceremonies in honor of ancestors. This animal is also linked to the pastoral nomads that lived on China’s northern and western frontiers. Simply carved images of various types of sheep and mountain goats abound on the rock cliffs of these territories, which are now part of China. The ram is sometimes associated with justice because a legend tells that the mythical emperor Gao Yao had in his court of law an insightful one-horned ram who would strike only the guilty and not the innocent. These animals are represented, though not frequently, in Chinese painting. —Paola Demattè in Ai Weiwei: Circle of Animals, ed. Susan Delson